Paradigm has finished development on its new T3-licensed action game, and we get a look at the final version.

Paradigm will have a dubious legacy working against it when its game, Terminator 3: The Redemption, ships next month. Why is that? We can't say last year's T3: Rise of the Machines was, well, good. In fact, it was pretty awful. But take heart, Terminator fans. The Redemption has shaped up to be a solid-looking action experience that takes the franchise in some new directions. And since the game just recently went gold, it'll have no problem making it to shelves for its September release date.

We've had several looks at The Redemption before, but what struck us about the game this time was that it was much more polished than it's appeared in previous versions. For instance, the melee combat interactions between the Arnold-look-alike Terminator and the endoskeleton enemies look more fluid and convincing than they did before. The camera has been tweaked during the vehicle sections to make it easier to see where you're going. A heads-up display has been added to keep track of your remaining scanvision capacity. In short, the game has been cleaned up and polished into a much more refined state, which is always good to see.

The Redemption doesn't just look better, the team has also gone about rebalancing and tweaking some of its features. For instance, the hard lock-on feature in the on-foot missions has been removed to give you a bit more aiming freedom. One feature that apparently didn't test well with focus groups was a mission timer, which required you to finish a level within a time limit to progress. Now you have as much time as you need to finish, but coming in under the limit will reward you with extra bonuses. We also found out about a new bonus feature that will allow you to essentially play levels further ahead in the game that you haven't reached yet--although in this mode, you won't receive credit or any bonus points for finishing them. This mode is simply meant for those people who are having trouble finishing their current mission but would like to check out what happens later on in the game's story.

We got to see a level from near the end of the game, which we haven't seen before, that showed the Terminator riding a hunter-killer tank through a large industrial corridor while attempting to shoot down a bomber that was flying overhead. Later on in this mission, the Terminator took control of a large bipedal attack machine and began to walk around while fighting other tanks and stomping on scores of endoskeletons. This mission emphasized the many types of action--such as driving and rail-shooting--that the game will offer.

Since Terminator 3: The Redemption is officially done, there's not much more to say about the game until we review it. So be sure to look for a full rundown in the near future. 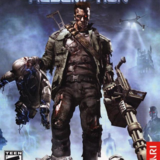