We check out the latest build of the first-person shooter based on the summer blockbuster.

We got to see a new and fairly well-developed version of Terminator 3: Rise of the Machines on the Xbox at the recent Atari press event, and the game has been fleshed out quite a bit since it was last on display at E3. As you'd expect, Rise of the Machines follows the blockbuster movie of the same name starring potential California governor Arnold Schwarzenegger, and as we watched the game in action we found out more about how the game will tie in to the storyline of the movie, as well as some more info on the mechanical aspects of the game.

You'll play most of Rise of the Machines from a first-person perspective, and it seems the game will pretty much follow the standard FPS formula. One twist on the action is that, since you're playing as a terminator, you'll be able to lock onto enemies much like in last year's Metroid Prime. The game will feature a whopping 22 weapons and 22 levels in which to use them, though we were assured this is merely a coincidence and there's no direct tie-in between weapons and levels. The game's storyline will follow the plot of the movie more or less directly, though it will also branch off at times. For instance, you'll actually play as a terminator in the future in a mission that's not shown, but merely described, in the film.

There will be more to Rise of the Machines than just FPS action, though. You'll engage in melee combat with the TX, the cybernetic villainess of the film, at key points throughout the game. You wouldn't expect the T-800 to perform any martial arts, of course, so these scenes will be more about powerful attacks, grappling moves, and dodging than your typical fighting game. In addition to these occasional changes of pace, there will also be quite a few extras for serious T3 fans. For one, the voices and likenesses of all four of the principal actors--Schwarzenegger, Nick Stahl, Claire Danes, and Kristanna Loken--will be included in the game. A good bit of film footage will also be accessible as an extra, some of which was filmed exclusively for the game and reveals more of the movie's storyline. Finally, the game features an extensive amount of impressive CG that's being produced by a French studio that previously did work on Final Fantasy X.

Rise of the Machines is a pure action game at its heart, and Atari is employing a very large pool of talent to bring various portions of the game to life. In addition to the core development team, Unreal II developer Legend Entertainment is working solely on the weapon models and effects to give them as much punch as possible. Enter the Matrix developer Shiny is also contributing to the hand-to-hand combat portions of the game, and Australia-based Melbourne House is working on Rise of the Machines' sound design. If anything, the many contributors to the new T3 should be able to flesh out their respective portions of the game more fully than a single developer alone.

Graphically, T3: Rise of the Machines is looking pretty good on the Xbox. Though Legend was just starting its work on the game's weapons, the ones we saw packed a pretty solid punch, and the environments and characters look pretty well crafted as well. We were told that Melbourne House has just recently begun working on the game's audio, and so we weren't able to hear a whole lot, but what was available sounded suitably gritty and appropriate to the license. The inclusion of celebrity voices will undoubtedly lend the game some extra authenticity and impact as well.

On the whole, Terminator 3: Rise of the Machines looks to be going well above and beyond the typical movie-licensed action game. Pending final approval of the licensed content, we should be able to show you more on the game in the near future. Rise of the Machines is currently slated for release in November. 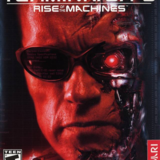 Terminator 3: Rise of the Machines
Follow
$29.96 on Walmart
Buy