We scope out TKO's mobile interpretation of the console ninja sim at E3.

Activision's ninja epic on the console was a complex combination of stealth and aggression, and TKO's near-complete version captures the essence of the original game. The perspective has been changed from a behind-the-back view (à la Tomb Raider) to a broadened overhead view, giving you the opportunity to plan attacks well in advance.

Only one character made the translation--the female ninja Ayame--but many of the original items are available, including smoke bombs, shuriken, and sleeping darts. The storyline remains the same, but the six game missions seem tailored for the cell.

Shadows are still the ninja's best friend, and trees provide shade to conceal your ninja from surrounding enemies. A meter shows your degree of stealth, and also the awareness of local enemies. The higher their awareness level, the more difficult it is to remain hidden from enemy view.

The music is as intricate as in the console version, and the graphics are small but detailed, particularly in the cutscenes that move the story forward. Most impressive are the decapitation animations that occur when you sneak up on a guard.

TKO has also added unique features, including ninja vision, which gives you the ability to see beyond the current screen, to examine guard positions, and even to see what items each enemy is carrying. Look for this one in July. 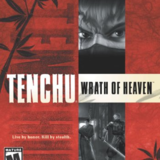