Sega today announced that Tenchu: Fatal Shadows has shipped to retail stores. The PlayStation 2 stealth action game was developed by K2, the studio behind Tenchu: Return From Darkness for the Xbox and Tenchu: Wrath of Heaven for the PS2.

Gamers will alternate playing as the familiar Ayame and Rin, a young ninja-in-training. After witnessing her village go up in flames, Rin swears bloody revenge on the culprits. Fatal Shadows returns the ninjitsu action made famous in the Tenchu franchise, focusing on stealth and acrobatic kills rather than straightforward slicing and dicing.

Though Fatal Shadows sticks with the familiar formula of the Tenchu franchise, some new gameplay elements have been added. In addition to the requisite enhanced graphics, Ayame and Rin can now breathe underwater using hollowed reeds, hide fallen enemies, or even use corpses to bait guards. 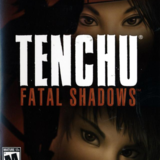