The free game is available today for $200 Samsung Gear VR Innovator Edition, an early version of the Oculus-powered VR headset that was released earlier in December. You can download the game today from the Oculus Store.

Just like the original game and its sequel, Temple Run VR tasks you with running for your life to escape from demon monkeys. But this time you're in a snowy setting. This new version, of course, puts the experience into first-person, challenging you to dodge snow and ice, cross dangerous bridges, and vault over objects in your path from an all-new perspective.

For more on Temple Run VR, check out the image gallery below. Be sure to click each image to see a full-size version. 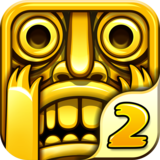