Temple Run: The Rough Road to a Runaway Success Story

After 40 million downloads on iOS, Temple Run is now available for Android. Ryan Rigney speaks with the husband-and-wife team behind the runaway success.

Ever since Apple opened its App Store in June of 2008, a modern-day gold rush has taken place in basements and tech company cubicles across the globe. Since anyone with basic programming ability and an innovative idea has the opportunity to create and sell their own apps, there are a lot of people out there trying to cook up a hit. Some have struck it big, but few see as much success as Keith Shepherd and Natalia Luckyanova, the husband-and-wife team behind Temple Run. Nearly 40 million people have downloaded the game since its release last August. Temple Run has dominated the App Store sales charts since December and the game is generating more revenue than games created by companies with hundreds of employees. 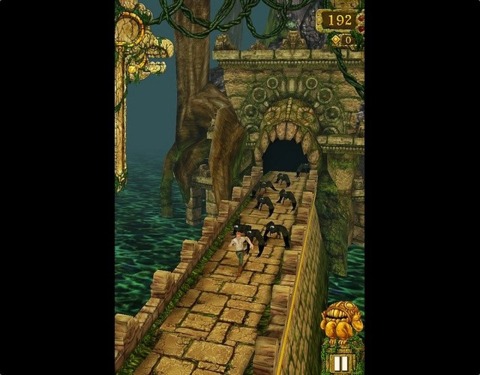 So how did two residents of Raleigh, North Carolina become high-profile multi-millionaires, seemingly overnight? As it turns out, riches and fame don't come easy, because they've been doing everything they can to achieve success for a long time.

Shepherd and Luckyanova are an undeniably cute couple, but they don't look like high-profile multimillionaires. Shepherd is tall, with a boyish grin that makes him look more like an older Justin Bieber than a thirtysomething software engineer. Luckyanova, too, doesn't immediately seem to fit the bill of a stereotypical game hacker/programmer. The two met while working together as software developers at a healthcare company. They dated and were wed within a few years, and soon enough began thinking about leaving their dreary day jobs to start a business together.

Luckyanova estimates that at one point, Harbor Master was making more money in one month than the company had made in the entire previous year.

"Keith is a huge Apple fan, and he had the first iPhone on the first day it came out," says Luckyanova. "When Apple announced that the App Store was going to be opening up for apps, we really thought that'd be an amazing opportunity to try to do something."

In the spring of 2008, shortly after the announcement of Apple's App Store, Shepherd took the big leap, quitting his job so he'd have time to familiarize himself with the iPhone's software development kit. "We figured that––worst case scenario––he can always go back and get another job, and if not this could be a great opportunity," says Luckyanova. "In the meantime I'd support us and be the financial cushion."

The first project that Shepherd took on was a word game. The two called the game Imangi (pronounced "i-mahn-gee") and filed to register a company with the same name. The game made just over $5,000 in its first month on the market. Luckyanova and Shepherd were encouraged by their good fortune. At this point, they decided that it could actually be financially viable to pour all of their time into making apps for the App Store. In what Shepherd now calls naive thinking, he recalls his belief that, "If we made 12 of these per year, that'd be a living!"

The next few efforts from Imangi Studios were not quite as successful. After quickly creating another word game with similarities to Imangi, Shepherd and Luckyanova decided to make a slightly bigger-budget racing game for kids. The game, which allowed players to take control of 3D cartoon children rocketing down a snowy mountain, was called Little Red Sled. Shepherd and Luckyanova estimated that they could complete the game in just three months. It took six.

Little Red Sled was supposed to make it onto the market by Christmas, but Imangi Studios missed that mark considerably. "So this snowy, Christmas-themed racing game came out in February," laughs Luckyanova. "That's when we swore that we would never do seasonal games again."

After Little Red Sled failed to make much of an impact, Shepherd and Luckyanova changed their strategy; quick, simple projects would be their motif. "You can play it a million times, and you're going for a high score," says Shepherd, describing the sorts of games that Imangi resolved to make. "That kind of gameplay with the intuitive controls fits really well with people's lifestyles and how they play games on a mobile device."

Imangi Studios did manage to keep their next project small. Harbor Master, released in the summer of 2009, wasn't a big project, but it became a hit, taking in well over $100,000 over the course of the next year. Luckyanova estimates that at one point, Harbor Master was making more money in one month than the company had made in the entire previous year. Before, Luckyanova and Shepherd say they often worried whether they'd be able to meet the month's rent. Harbor Master's popularity put the studio on the map and gave the couple the confidence they needed to keep working.

Things were looking up for Imangi, but the following year and a half would put a test to the couple's newfound confidence. Despite expanding slightly to hire a talented full-time artist (Bulgarian-born Kiril Tchangov) after Harbor Master made it big, the small team was unable to duplicate their previous successes. The biggest blow came with the muddled launch of Max Adventure, a shooter game that took Imangi nearly a year to create.

Although customer reviews of Max Adventure were extremely positive, the game failed to grab an audience. According to Shepherd, it was both Imangi's biggest investment and biggest flop. "It was a big disappointment for us," Shepherd admits. Despite this, Shepherd and Luckyanova were determined to make another successful game. They decided to take a step back and analyze what went right and wrong with Max Adventure. The biggest issue appeared to be the game's controls, which utilized an on-screen "virtual stick" layout, something oft-derided by players for being an ineffective method of utilizing a touchscreen. To address this, Shepherd begin experimenting with ways to control Max differently.

Shepherd went into Max Adventure's code and altered it so that instead of controlling Max himself, players could control the world while Max walked forward automatically on his own. Shepherd describes it as being like if Max was walking on a spinning rotisserie platter or a record, which could be directed by a player's touch. Unfortunately, the spinning world idea turned out to be a bust. "It was kinda cool to spin the world around, but it made you extremely dizzy," Shepherd says.

The experiment wasn't a complete waste, though. Max Adventure already has lots of collectable coins scattered all around its world, and Shepherd noticed that it was weirdly enjoyable to make Max walk around and aimlessly collect the coins. He made note of that, and kept the coins in for future experiments. Next, Shepherd and Luckyanova decided to re-arrange Max Adventure's controls and use a swipe method instead, limiting him to just 90 degree turns. They changed the camera angle to be behind Max, instead of high above him like in the released version of the game. "We thought we were onto something, and we started thinking about what kind of environment would be fun to have the character walking around in," Shepherd says. "We thought that with these right-handed turns, you could be navigating a maze."

Shepherd and Luckyanova figured that the explorer needed to be running away from something, but what? Tchangov doodled up a solution––evil demon monkeys.

Earlier, Tchangov had done a sketch of a maze in the sky. "It reminded me of the old Windows screensaver with the pipes that just randomly generate out everywhere," Shepherd says. "We thought, 'what if you're walking along these pipes, and you have to turn when you get the to the end of them?'" It had only been a week since Imangi Studios had begun its experiments with prototypes based on Max Adventure, and they already had an entirely new game that very closely resembled what would later become Temple Run.

Tchangov came up with a Mayan temple theme to use with the game, and things began to fall together. "It had this explorer vibe to it," Shepherd says. "We started thinking more about where is this guy running, and why can't he stop. We came up with this mythology where he's an explorer who's stolen something from this temple, and he's in this weird limbo place where has to run endlessly." Shepherd and Luckyanova figured that the explorer needed to be running away from something, but what? Tchangov doodled up a solution––evil demon monkeys. "To be honest, we were confused when Kiril first drew them," Luckyanova says. "Kiril loved drawing them––I think his sensibilities are a little more dark. Being able to draw something with skull faces and terrifying wing arms was really fun for him."

"Natalia hated them initially," Shepherd says, laughing. "I kept saying to her, 'I'm not a huge fan of the monkeys either, but Kiril really loves them.' I think that so many people ended up liking them, and they are kinda scary and creepy, so it really did work with creating tension in the game." That sense of tension was an important element of Temple Run's design from the beginning. Luckyanova and Shepherd wanted to make it so that players felt compelled to continue running, but were worried that making the baddies in the game too scary could turn off some people.

"We were always arguing whether that 'oh, sh*t' feeling you get when you see the monkeys was good or bad," Luckyanova says. "Does it give you adrenaline and tension and force you to run more, or does it make you say 'oh my god, what the hell is this game?'" Shepherd says that he and Luckyanova had a similar discussion about the game's icon. "The idea is that it's the treasure being stolen," Shepherd says. "But it has this terrifying face on it and we wondered if it was going to scare people away from buying our app."

Shepherd and Luckyanova's concerns haven't coalesced into anything capable of stopping Temple Run's success. The game, which only took about four months to develop, often sits in a high position on the App Store's "Highest Grossing" chart. That means that it's making more money than nearly every popular iPhone game or app one could think of––Jetpack Joyride, Words With Friends, and (sometimes even) Angry Birds.

"The success has been phenomenal," says Shepherd. "When you're developing games you always hope that there will be a hit and people will love them. But this has become a hit on a level beyond what we ever imagined. Everybody is playing it." By Imangi's own metrics, over 10 million people play Temple Run on a daily basis. Now, when Luckyanova and Shepherd go out, they'll often see multiple people playing the game they created.

Shepherd says that although the financial success of Temple Run could allow the team to expand, Imangi Studios plans on continuing to keep things relatively small-scale. "We like being a small team," he says.

Ryan Rigney is the author of Buttonless: Incredible iPhone and iPad Games and the Stories Behind Them.