Temple Run movie in the works with Harry Potter producer

Warner Bros. in negotiations to bring adaptation of mobile game to the big screen with Harry Potter producer David Heyman.

The Temple Run franchise may be racing to theaters if a new report proves accurate. The Hollywood Reporter claims Warner Bros. is in negotiations to bring the popular mobile game to theaters with Harry Potter producer David Heyman attached to the project.

The film's story would focus on an explorer who steals an idol from a temple and is chased by "demonic forces." In the Temple Run games, players are pursued by evil monkeys.

It is unclear if the Temple Run movie would be live-action or animated. A director for the film has not been named, nor have casting details or a targeted release date. A writer for the upcoming film is currently being sought, The Hollywood Reporter says.

"No official comment yet, but we're very excited about the potential of a @TempleRun film. Thanks for all the support everyone!," creator Keith Shepherd said on Twitter.

The first Temple Run game was released on iOS in 2011 from Imangi Studios, a husband and wife team based in North Carolina. A sequel was released this year. Licensed spinoffs based on franchises like Pixar's Brave and Disney's Oz the Great and Powerful have also been released. 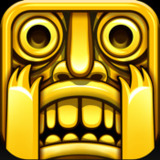