Telltale isn't exactly the biggest of game development studios, but the episodic adventure game specialists can't seem to stay out of the headlines of late. Following on from its deal with Warner Bros. to create games based on the Walking Dead and Fables franchises, as well as attaching an April release date to its NBC Universal deal to bring Jurassic Park to the PC and Mac, Telltale has three more games to talk about.

First on the docket is Puzzle Agent, the first installment of which was announced for WiiWare, PC, and iOS platforms as part of Telltale's Pilot Program back in April 2010. Along with confirming that the original Puzzle Agent would see release on the PlayStation Network this spring, Telltale said that a second installment in the series will arrive for the PSN, PC, Mac, and iOS devices this summer.

Puzzle Agent 2 picks back up with the first game's emphasis on puzzle-heavy adventure gameplay, which was inspired by Level-5's 11.5-million-unit-selling Professor Layton series. Designed in conjunction with indie comic artist and animator Graham Annable, the game sees Agent Nelson Tether returning to the sleepy Nordic town of Scoggins, Minnesota, to crack an all-new mystery.

Telltale also announced today that it would be bringing Straandlooper's episodic adventure game Hector: Badge of Carnage to the iPad, PC, and Mac this spring. (It was previously released by Straandlooper for the iPhone last summer.) Described as a "lewd, crude, and gritty law enforcement comedy," the title stars corrupt Detective Inspector Hector, who proves to be his precinct's only hope in negotiating the release of a hostage. Additional episodes will be released throughout the year.

Lastly, at an event in San Francisco last night, Telltale also confirmed that it would be rebooting Sierra Entertainment's classic King's Quest adventure series. No additional details on the reboot were revealed, with Telltale saying only that more information will be offered as part of the 2011 Electronic Entertainment Expo in June. 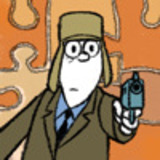