Blitz Games wins Application of Technology Award at UK festival for its work on The Fairly OddParents: Breakin' Da Rules.

UK-based developer Blitz Games has scooped the inaugural Application of Technology Award at this year's Birmingham Screen Festival for its work on The Fairly OddParents: Breakin' Da Rules. The award, which was presented at a gala dinner last week, recognizes the company's rendering technology that was designed to accurately re-create the distinctive visual style of the TV show in a 3D environment.

"It's a huge honor for us to be recognized in the same awards night as our colleagues in film and television, and this award is a testament to the dedication and hard work that the entire development team put into the project," said Jon Cartwright, project manager at Blitz Games. 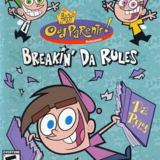