Team17 Announces Worms NFTs, But They Won't Be In Actual Games

Many of Team17's staff were apparently unaware of the plans before they were announced.

Indie game publisher Team17--best known for its Worms series--announced a new line of NFTs today, but it has clarified they will not be available in its actual games following swift backlash. In fact, some of the company's own staff were apparently unaware of the news before it was made public.

MetaWorms, which is a collaboration between Team17 and Reality Gaming Group, is described on its official website as a "generative NFT art project," and a spinning image of a very sparkly Worms character is included. Using a "side chain" of the popular Ethereum blockchain, Team17 said it will not use as much energy as other NFTs and a portion of proceeds will go to its Refeed Farms plan.

Ethereum is phasing in a "proof of stake" system for validating transactions in 2022. It's a shift from "proof of work," which is much more environmentally costly and is largely responsible for why you have had such a hard time finding a GPU.

According to Eurogamer, the announcement came as a surprise to staff, and some who knew ahead of time had voiced disapproval. However, there aren't plans to actually bring the art into games.

"Team17 is licensing the Worms brand to our newest third-party partner so they can produce collectible digital artwork based on one of the most beloved IPs in indie games, in a similar way to already available physical merchandise," Team 17 told Eurogamer, adding that there weren't plans to NFTs to be added to "any of its indie games label titles."

This is hardly the first time we've seen NFT plans come under fire in the game industry. Ubisoft rolled out its Quartz platform and implemented NFTs in Ghost Recon Breakpoint, later implying players don't understand why they would want them. Elsewhere, celebrities who planned to launch NFTs, like Troy Baker and, for some reason, Home Improvement's Richard Karn, have reversed course. 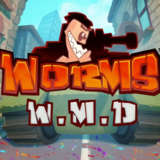