This Russian-developed space sim will feature advanced graphics along with plenty of dogfighting action.

Tarr Chronicles is a space sim being developed by Russian developer Kvazar Studio. Like old-fashioned space sims, such as Freespace or TIE Fighter, Tarr Chronicles is all about climbing into a nimble space fighter and dogfighting it amongst the stars. At the same time, the game also promises a considerable amount of customization, along with some cutting-edge graphics.

Like almost every space sim, Tarr Chronicles qualifies for space-opera status. The game is about a lost human fleet that discovers an ancient city on a mysterious planet. This event triggers a fierce alien response, and you, as one of the fleet's fighter pilots, must fly to defend the Battlecruiser Talestra as it attempts to make its way home. That involves plenty of dogfighting in up to 60 customizable fighter craft, ranging from fighters and bombers to corvettes, which are basically heavy fighters. The enemy in this case is the alien De'Khete, a race that is only described as unstoppable. But it'll be up to you and your wingmen to try.

Flying around in Tarr Chronicles can be done in third-person view, with you seeing your fighter onscreen, or first-person view, staring out the front of your cockpit. Either way, your job is to shoot down enemy craft, using lasers, missiles, rockets, and more. Interestingly, the game will not feature joystick support, but you can fly using the mouse and keyboard or a gamepad. Your wingmen will be intelligent enough to follow you around and support you, but you won't have to issue them orders or commands. The missions will range from simple intercept to escort and more, but they sound like the standard type of space-sim missions.

An interesting aspect of the game is that you are automatically rewarded with resources after each mission, and you can then combine the many types of resources together to create a myriad of devices, such as better shields or a new type of weapon. Then, you can choose from more than 150 standard parts. When you consider that there are 60 customizable ships in the game, that's a lot of specialized craft you can create. Meanwhile, there are nine missions in the game, each with up to 15 "quests" in them, so it sounds like you'll have plenty of opportunity to try out each different craft. The game only has the single-player campaign, as there won't be any chance to go online in multiplayer.

Visually, Tarr Chronicles looks advanced. The ship designs in the game look futuristic and sleek, hanging against a beautifully lit void. The lighting and shadowing effects capture the "deep space" feel of the setting. You'll also dogfight near glowing nebulas and impressively rendered planets. When you put it together, Tarr Chronicles is a game that could get space sim fans excited again. However, they'll have to wait a few months because it won't ship until September. 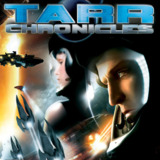