Tales of Xillia getting Western release

The Tales role-playing game series will continue being told in the West, as Namco Bandai today announced that its PlayStation 3-exclusive Tales of Xillia will launch in Europe and North America in 2013.

Tales of Xillia was a hit in Japan, selling more than half a million copies in its first week on shelves last September. By year's end, the game had sold 760,000 copies. Tales of Xillia 2 is set for Japanese release later this year.

In a statement announcing the date, Namco Bandai's US VP of marketing Carlson Choi called the decision to localize the game one of the easiest the publisher has made, thanks to "the recent success for this year’s releases of Tales of the Abyss and Tales of Graces f."

The story of the latest game is set in Rieze Maxia, where humans and monsters live together with spirits. Players will be able to play as Jude Mathis, a medical student who defends himself with his fists, or Milla Maxwell, a mysterious female who has to recover her lost ability to summon spirits. The game features the Double Raid Linear Motion battle system, which has two characters teaming up for coordinated attacks and pulling off powerful special moves called Link Artes. 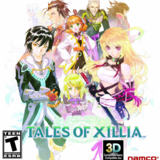