Namco will partner with Dwango to release online version of its premier RPG series to PCs; beta testing to begin in early 2005.

TOKYO--Namco and Dwango have announced that they will bring a massively multiplayer online role-playing game based on Namco's Tales of Eternia RPG series to the PC next year. The original Tales of Eternia was released by Namco back in 2000 for the PlayStation, and it was released in America under the title Tales of Destiny II. A port of the original game is planned for the PSP.

Namco will be directing the project, providing the graphics, and managing the online service; Dwango will be planning out the game's specifications and developing the server and client programs. Tales of Eternia Online will run on PCs operating on Windows 98 SE and higher; no hardware specifications have been announced yet.

It seems that Tales of Eternia Online will feature gameplay similar to traditional console RPGs, switching between field map and battle screens during enemy encounters. The game will adopt the series' traditional Linear Motion Battle system, which features real-time fighting on a 2D plane.

TOE Online will also implement a version of the series' Skit system, which in the console installments allowed the player to launch a dialogue window in which party members would converse with each other, fleshing out the nuances of their characters while dropping some gameplay hints to the player. It is not known how this system will be altered for the format of an MMORPG.

Aside from fighting and adventuring through towns and dungeons, the players will also be able to cook food items using found ingredients, also a staple of the series. While it's unknown whether characters from the original Tales of Eternia will appear in the Tales of Eternia Online, it seems that areas from the console title will be featured in the game. One of the released screenshots shows a number of players walking around the home of Reid Hershel, the hero of the original game.

Tales of Eternia Online is scheduled to begin beta testing in early 2005, with the service starting in the spring. The company also hopes to launch the game in other Asian countries during 2005, but it hasn't mentioned any plans for America for now. More details on Tales of Eternia Online should be released on Friday, when Namco will open the game's official Web site. 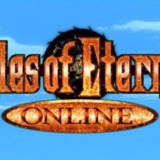