If juggling comics-come-to-life massively multiplayer online games were a superpower, Cryptic Studios would be powerful enough to open its own school for the gifted. Best known for the now-NCsoft-owned superpeople-themed MMOG City of Heroes/Villains, Cryptic was also developing Marvel Universal Online for Microsoft before its quiet cancellation.

Like one of its games' superheroes, Cryptic quickly bounced back, taking the work it had done for the Marvel MMOG and turning it into Champions Online, a new massively multiplayer project for the PC and unspecified consoles. Today, the mystery platform was unmasked when Take-Two Interactive announced that it will publish the game for the PC and the Xbox 360 under its 2K Games label.

Today's announcement offered few new details about Champions Online. The game will be an offshoot of Hero Games' 1981 pen-and-paper role-playing series, which Cryptic now owns the rights to. (The game's next analog installment is due out in 2009.) Promising "billions" of customization options, the game will let players create their superhero's name, backstory, costume, powers, abilities, and archenemies.

Champions Online is slated to arrive for the PC and Xbox 360 in spring 2009. Like any superhero, it will have a nemesis in the form of , which is in development for the PlayStation 3 and PC. 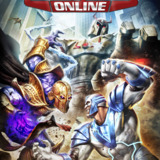