Publisher ships out its Xbox 360 launch lineup with features ballers, boarders, and bruisers.

Gamers who like to crash the boards, ride on boards, and check people over the boards, won't be bored with today's news from Take-Two Interactive. 2K Sports, a subbrand of the Grand Theft Auto publisher, announced that its trifecta of Xbox 360 launch games--Amped 3, NBA 2K6, and NHL 2K6--has shipped to retail stores.

Amped 3, an Xbox 360 exclusive, is the only next-gen snowboarding game currently announced. Virtual shredder will be able to hit the slopes of sites like California's Northstar, Utah's Snowbird, and France's Avoriaz while being immersed in the "culture, style, music, and attitude of snowboarding." Amped 3 was developed by Indie Built, a 2K Sports studio located in Salt Lake City, Utah, and is rated T for Teen.

2K not only covers the snow, but also the ice. NHL 2K6 skates onto the Xbox 360 with all the new rules instituted by the professional hockey league. Because the increased action will lead to higher scoring opportunities, 2K added the crease control feature, which gives players a new perspective on goaltending, as well as a chance to make some impressive saves. NHL 2K6 is rated T for Teen.

For gamers who prefer their goals to score two or three points, 2K is also bouncing NBA 2K6 onto Microsoft's next-gen console. This version of the basketball game has been retooled from its current-gen versions for more-realistic gameplay, and enhanced graphically for smoother animations and sharper visuals. Game modes and features from its Xbox cousin have been retained, including the shot stick, the association, and 24/7. NBA 2K6 is rated E for Everyone.

Official pricing for all three games is tagged at $59.99. For more information, check out GameSpot's previous coverage on Amped 3, NBA 2K6, and NHL 2K6. 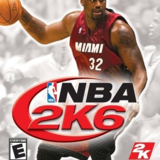