TOKYO--Namco's popular arcade and mobile drum game Taiko no Tatsujin came to number two Japanese cell carrier KDDI/Au'sEZWeb Internet service today. The game is available to all users with BREW-enabled handsets for 300 yen ($2.75) per month. (BREW is software developed by Qualcomm to allow use of multimedia content on devices with low-end processors like phones and PDAs.)

EZWeb users had to wait half a year longer than users of DoCoMo's i-mode service to play the drums on their handsets--although considering the disparity in market sizes, the delay is easy to understand. At the beginning of November, i-mode claimed 40 million subscribers while EZWeb tallied only 14 million, so it's no surprise that Namco placed a lower priority on the EZWeb version of its game.

[UPDATE] Contrary to what was previously reported on GameSpot, users of carrier Vodafone K.K. (formerly J-PHONE) have been playing Taiko no Tetsujin on mobile handsets since November 14, 2001. 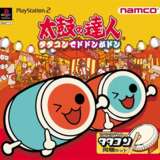