The developers at Irrational Games look back at its very first game...and look ahead to its next one.

You may find it hard to believe that the offices of Irrational Games, which are quietly nestled in a small corner of Boston, Massachusetts, gave rise to such highly acclaimed games as Tribes: Vengeance and Freedom Force. The developer itself isn't really all that small, considering that it has two full studios (one in Boston and one in Canberra, Australia). But things weren't always this way. According to general manager Ken Levine, the studio began its life in his living room in 1997, when he and fellow employees Jonathan Chey and Rob Fermier of now-defunct Looking Glass Entertainment decided to leave their employer to form their own company, which would go on to develop a game called System Shock 2--a game we'll take a retrospective look at in anticipation of Irrational's next project, which we'll reveal to you exclusively tomorrow. (Here's a hint: it will likely please fans of System Shock 2.)

The System Shock 2 we know was the 1999 cult classic; a hybrid role-playing game that let you create a character with varying skills in marksmanship, stealth, computer hacking, and even psionic powers, to investigate a starship stranded in space and loaded with corpses. The game emphasized careful exploration, and it contained very strong horror elements--both of which resulted in great acclaim from the press and from a group of loyal fans. But the System Shock 2 that Irrational started on some seven years ago was a bit different.

Irrational's start was bumpy, to say the least. The studio's first contract was to create a single-player component for Multitude, Inc.'s PC shooter FireTeam, whose multiplayer game was so good that the single-player game got canceled. This meant that Irrational was out of its first job. Ironically, its second job was a contract deal for its former employer, Looking Glass, to make a new game based on the "Dark" engine--the graphics engine that was being used to develop the 1998 game Thief: The Dark Project.

Despite the fact that the three founders of Irrational had basically moved into a back office at their old workplace as contractors (and suffered more than a few dirty looks), the Irrational group decided, without hesitation, to work on a follow-up to the 1994 cult classic, first-person role-playing game System Shock. The team got to work on a spiritual successor, code-named "Shock," which ended up using several of the first game's interface features, including a slotted inventory system and a paper-doll equipment system.

More importantly, "Shock" also featured what the optimistic trio referred to as "the tragic vibe" from the first game. Rather than fighting dragons to rescue princesses, both games would have dramatic elements that suggested ill-fated characters in ruinous circumstances.

After a series of coincidences, good and bad, Irrational wound up with a publisher for the project, which eventually became System Shock 2--the game that Irrational had wanted to work on since the beginning. Some might say that the game's development was a remarkable accomplishment, considering that it was completed within the span of just more than a year and took a single-player-only, hardware-rendered DOS-based engine and converted it into a 3D-accelerated game with working multiplayer. But not all fans enjoyed the multiplayer, and as Levine mentions, the development process itself also offered plenty of strenuous challenges. Some of Levine's most vivid memories include E3 in May of 1999, which took place shortly after the tragic shooting at Columbine High School in Colorado. Because of this incident, Irrational was asked to bring a demonstration version of System Shock 2 to E3 that had no guns in it.

Yes. You read that right. No guns in the E3 demo. It was already hard enough to make a compelling presentation of the game to an uninitiated audience, let alone the fact that there were no guns and System Shock 2's primary appeal was in its open-ended gameplay (rather than in any fancy graphics or technology). Levine recalls the irony of trying to give five-minute presentations for a game that can't be explained in five minutes. Mainstream reporters from local Los Angeles TV stations and newspapers roved the show floor, like sharks that had scented blood, in search of "violent video games" to point a camera at and run an alarmist cover story on. "It was a uniquely depressing experience," the general manager says with a pained smile.

From E3 to Monkeys in 15 Months

And looking back, the general manager also remembers another alarming moment in System Shock 2's development: a conversation Levine had with Paul Neurath (the head of Looking Glass), who asked him, "Is this game going to be scary?" Levine was struck with a sinking feeling at that moment when he replied, quite honestly, that he couldn't say for sure. You might be surprised to hear this about a game that has gone on to win praise from its fans for its creepy atmosphere and its excellent use of sound, but apparently, this uncertainty came from the fact that Irrational wasn't looking to copy a popular horror movie or novel. "Movies don't scare me," the general manager explains matter-of-factly.

The team began growing over time, with the additions of sound designer Eric Brosius, artist Nate Wells, and designer Dorian Hart--who was actually co-founder Rob Fermier's roommate at the time. The group eventually identified four major points that it felt would successfully make for a scary game. Chief among these was a feeling of isolation; of being away from civilization, help, and all human contact--like being stranded on a spaceship full of corpses and bereft of survivors. The team also felt it important to instill a sense of vulnerability in the player. Rather than making players out to be extremely powerful, they would instead be fragile bit players caught up in a hostile world. The other two key factors in Irrational's estimation were excellent sound effects and intelligent use of lighting and shadows. That is, presenting environments that weren't as dark as pitch, but were instead scarcely lit, producing flitting shadows.

These overarching concepts led to features that didn't always work out favorably--many detractors have criticized the game for its highly breakable weapons and its constant respawning of monsters. Both these features were intended to induce tension and a true sense of peril--but many found them to be more annoying than anything else. Yet other aspects of the game's design seemed to work out all right with the fans, such as its emphasis on meticulous pacing, which included tacit signs that you weren't the first character to attempt to do what you were doing. Throughout the game, you'd find journals from fallen characters and even small caches of weapons and supplies. In effect, you'd read that someone else, just like you, had holed up in this very spot and attempted to make a last stand, and nothing but the smear of blood on the wall or the severed arm on the floor remained.

Journal logs, or more specifically, narrative, was another key feature in making a game that was both frightening and tragic. Rather than filling up rooms full of huge, impossibly muscled monsters, System Shock 2 pitted you against some enemies that were previously human but were now pitifully small and weak. They'd either carry logs marked by the horrified realization that they were becoming something other than human, or they'd possess just enough humanity to beg you, in a broken voice, to end their lives.

Naturally, this brings us to the monkeys. Yes, monkeys. More specifically, one of System Shock 2's more-bizarre enemies was the abused lab monkey. These unhappy chimps had been subjected to horrible experiments, causing them to become feral. Though they were extremely fast and difficult to kill, they came about in the game by almost pure coincidence. According to Levine, much of the game's animation was recorded with clunky old motion-capture equipment and an equally clunky old SGI-rendering machine. One day, the team was actually ahead of schedule, and they still had use of the equipment for several hours after the regular motion capture had been completed. Urged by his companions to make the most of the expensive equipment, Levine's first thought was, "well...I do like monkeys..." The rest, as they say, is history. The monkeys, whose terrifying shrieks put many players on edge, had cemented their legacy.

But why even look back at System Shock 2 at this point? Because Irrational has been, and it plans to make a related announcement this Friday (tomorrow). The studio has decided that it wishes to further what it started in System Shock 2--to work on games that promote "emergent" gameplay--open-ended exploration that offers many choices and combinations of options to players. You'll see what we mean tomorrow. Be sure to come back then. 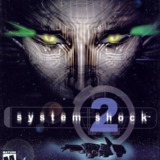