The iconic singer is working with former Battlefield developer David Goldfarb's studio on Metal: Hellsinger and performed a new original song for it.

Serj Tankian, the singer from System of a Down, has joined the cast for the upcoming metal music-themed video game, Metal: Hellsinger. Developer The Outsiders announced the news today and dropped a new trailer featuring an original song Tankian performed for the game, "No Tomorrow." The song was written by Two Feathers.

The Outsiders creative director David Goldfarb said the studio is filled with System of a Down fans, so it was "unreal" to get to work with him on Hellsinger.

"He completely killed the track and made it his own in a way only Serj could. We are so excited and can't wait to see everyone playing!" Goldfarb said.

In Hellsinger, the goal is to shoot, dash, and perform "finishers" to the beat of a song. Players have access to six weapons, each with their own "ultimate" ability, that can be used to kill demons. Veteran voice actors Troy Baker and Jennifer Hale voice the main characters.

Hellsinger features a different song on each level, and every track has multiple layers. "Your performance impacts how many layers of the song will be played at a time, starting with atmospheric background music, and ending with powerful metal anthems," reads a line from the game's description. 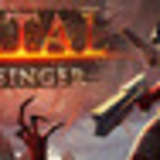