AKA Acclaim announces that it will release this realistic supercross game for all current console platforms in June.

AKA Acclaim has announced that it will release SX Superstar for the PlayStation 2, Xbox, and GameCube in June. The game, which is described as an ultrarealistic trip into the essence of supercross, will see players assuming the role of one of 24 different riders looking to make enough money from the sport by racing and performing tricks to move from the poorhouse to a penthouse.

In addition to 20 different tracks from all over the world, SX Superstar will feature a powerful course editor with more than 100 interchangeable track pieces and six gigantic arenas to work with. It's also been announced today that the game's soundtrack will feature a number of top artists, with those confirmed to date including the following:

"AKA Acclaim is committed to matching its games with dynamic soundtracks that enhance the gameplay experience," said Ben Fischbach, director of AKA Acclaim. "SX Superstar combines cutting-edge sights and sounds to deliver the best in action sports entertainment for the masses."

SX Superstar is scheduled for release in North America on June 24. We'll bring you more information on the game as soon as it becomes available, but in the meantime you might like to take a look at the official SX Superstar Web site. 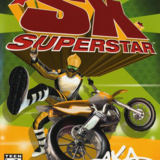