Kentucky Route Zero is one of the most acclaimed indie games in recent years, but it's been a long time in development. The adventure game's first episode released way back in 2013, while the most recent episode--the fourth--launched in July 2016. According to developer Cardboard Computer, we should see the last episode in 2018--and the studio announced today that it'll release the game on consoles alongside the last installment.

Kentucky Route Zero: TV Edition, as it's called, will be available on PS4, Xbox One, and Nintendo Switch. It'll include all five episodes as well as all of Cardboard Computer's "interludes"--smaller experiences released over the years that provide background on the game's universe.

Cardboard Computer hasn't announced a price yet, but it's likely that it'll be comparable to the PC version. You can buy all five episodes of the game on Steam for $25 right now. There's also no word on a specific date, although the studio says that it's targeting early 2018 for launch.

Kentucky Route Zero follows a truck driver, Conway, and his journey down a secret highway in--you guessed it--Kentucky. Don't expect much in the way of involved mechanics or puzzles; the game is way more about atmosphere, ambiance, and storytelling. And at that, it excels. Back when Episode IV was released, critic Justin Clark gave it a 9/10, writing, "Act IV proves the journey is everything, and what people take from and give to each other--even in the most desolate, purgatorial version of America imaginable--still matters." 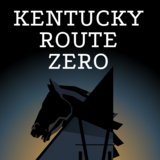