The game also arrives on PC in April.

The PS4 action-RPG Ys VIII: Lacrimosa of Dana is coming to Nintendo Switch this June. Publisher NIS America announced that the game will launch in North America on June 26, with a European release following three days later, on June 29.

The Switch edition of Ys VIII is billed as the "definitive" version of the title, featuring content from both the PS4 and Vita releases, along with their completely relocalized script. Switch owners will also have a chance to pick up a limited Day One Adventurer's Edition, which includes a reversible cover, a foil pack featuring three character cards, and a double-sided poster with heroine Dana on one side and a map of the Isle of Seiren on the other.

Coinciding with the release date announcement, NISA has shared a new trailer for Ys VIII, which you can watch above. The video provides a bit of background on Dana, the mysterious maiden that protagonist Adol dreams of after washing ashore on the Isle of Seiren.

In addition to Switch, NISA has also narrowed down the release window for the PC version of Ys VIII. The game is now slated to arrive for the platform via Steam sometime in April. Further updates on the status of the PC version will be announced on the publisher's blog.

Ys VIII was one of the many upcoming Switch games announced during January's big Nintendo Direct presentation. The game originally launched on PS4 and Vita last September and was well-received, earning an 8/10 in GameSpot's Ys VIII review. Critic Heidi Kemps said the game "delivers an immensely fun and memorable experience" and "will compel you to keep exploring for hours on end." 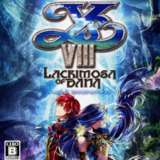