We play through a few missions from this upcoming tactical shooter.

Sierra's SWAT series has undergone a long and varied evolution over the years. It began as an offshoot of the Police Quest series, and previous SWAT games have occupied slots in many genres, sometimes under the tutelage of former LAPD chief Daryl Gates. The latest SWAT game, subtitled Global Strike Team, which is being developed exclusively for the PlayStation 2 and Xbox by Argonaut, brings the evolution of the series to its obvious conclusion as a squad-based tactical first-person shooter. We recently spent some time with three playable missions in an early PS2 build of the game and came away pretty impressed with the direction Argonaut is taking the franchise.

The flow of the missions in SWAT: Global Strike Team will be familiar to enthusiasts of objective-based tactical action games. You're a member of the Global Strike Team, an offshoot of SWAT formed in 2008 to supplement local law enforcement internationally. Each mission begins with a voice-acted mission briefing detailing the situation you've got to tackle--stopping a bank heist and apprehending key suspects, for instance, or infiltrating a terrorist stronghold to rescue a scientist who holds valuable information--and then you get to select your armament and head into the action. You'll choose weapons in three categories: lethal, less than lethal, and grenade. Our build of the game let us select from an assault rifle, a shotgun, and a machine gun in the lethal category, and a sniper rifle was also available on one level. The available nonlethal weapon was a tranquilizer gun (useful for incapacitating enemies that you don't want to kill), and grenades included flashbangs, concussion grenades, and gas grenades. We also got to use night vision and a gas mask in situations where it was appropriate to do so.

Since you're playing as a peacekeeping police force, there are certain rules you have to obey that you might not see in other games. For instance, you can't just run into a room with guns ablaze and waste everything that moves. Naturally, you're heavily penalized for killing civilian bystanders; in fact, you're penalized just for letting them die, since minimizing civilian casualties is one of the rules of engagement. Interestingly, you also have to pay attention to the hostile intent of armed enemies. Some of the crooks will lose their nerve at the sight of your heavily armed squad and surrender themselves. If you blow them away after they've given themselves up willingly, you've used unauthorized force and will again be penalized. In fact, you can't shoot enemies in the back if they haven't actually raised their weapon or threatened you yet. Gamers are generally a pretty trigger-happy bunch thanks to years of conditioning from typical action games, so it's interesting to see Global Strike Team making you think before you shoot.

The linchpin of Global Strike Team's gameplay is the way you interact with your teammates. You'll have either one or two teammates per mission, depending on the circumstances, and they'll stick with you the entire time, obeying your commands and generally helping you out. There are a lot of orders that you can issue--you can have your teammates follow you, secure a room ahead of you, restrain suspects, hack into computer terminals, disable bombs, and a lot more. You can deliver commands in two ways--by pressing directions on the D pad to select orders from a context-sensitive HUD or by simply shouting them into a headset microphone. The D pad solution is fast and works quite well, so if you don't have a headset, you won't have to run out and buy one to play the game. Actually communicating your orders vocally can really enhance the immersion considerably in certain situations, though, so die-hard tactical action fans will want to investigate this option. Each command has three or four different keywords, and the game will help you select which one is best based on how well it recognizes your spoken input.

Graphically, Global Strike Team is surprisingly high-quality. The levels and character models themselves are pretty solid, and the visuals convey quite a bit of atmosphere thanks to a really impressive indoor and outdoor lighting effect. The first level, which takes place in a bank that's under siege, features a lot of sunlight streaming in through large skylights and windows, and it looks strikingly realistic. Furthermore, if you've been in a dim room and then look into a brightly lit area, everything will appear glaringly bright until your eyes adjust. Conversely, running around a naturally lit area and then moving into a shadowy one will make things look very dark for a few moments, and again you can see things becoming more visible as your eyes adjust to the light level. The sound effects are pretty well rendered from what we heard, and the music is actually pretty good and lends a lot to the tension of the missions.

From our early experience with SWAT: Global Strike Team, we've got high hopes for the game. We only saw three missions in the current build--the bank heist level, a fight against criminals in tunnels under London, and a rescue operation in a Soviet industrial complex--but 21 are planned for the final game, along with cooperative and deathmatch play options. Global Strike Team is scheduled for release around the end of October, and we'll bring you more on the game soon. 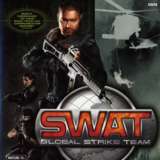