After almost two decades, the SWAT series is headed into brand-new territory. Sierra Entertainment today announced that it will be bringing the long-running franchise to the PlayStation Portable with SWAT: Target Liberty. The game is currently in development at 3G Studios, makers of Stacked for the PSP, and will be released this fall.

Unlike recent SWAT games on the PC, Target Liberty is a third-person tactical shooter. The story, written by The Shield's Scott Rosenbaum, sees a special weapons and tactics unit going up against terrorists in New York City and surrounding areas.

Gamers will control a SWAT team leader and go into battle with a small group of officers. Each team member has a unique skill set, and all units can be upgraded throughout the course of the game. In addition to the single-player game, Target Liberty offers an ad hoc multiplayer mode, though details are yet to be revealed.

SWAT: Target Liberty is rated T for Teen and has not yet been priced. For more information, read GameSpot's hands-on preview. 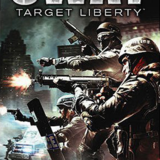