Surge 2 Release Date Leaks Prior To E3 2019; Coming This September

More dismemberment is on the way.

It's been almost a year since we saw The Surge 2's reveal trailer at Gamescom in August 2018. The 50-second gameplay trailer, above, shows more slashy, Souls-like action in a lush forest but little in the way of a release window. However, a new leak suggests The Surge 2 could arrive in a few months.

The Surge 2's release date was uncovered via an Australian Microsoft Store listing. The listing states that The Surge 2 will launch on September 24, 2019. It is, of course, possible this date will prove to be inaccurate; Nintendo's website recently led us to believe Cadence of Hyrule would be out at the end of May, but it now looks as if it's instead launching this month. But given this Surge 2 date is listed directly on the page, it seems as if it could be real.

According to the list, The Surge 2 will retail for approximately $60 USD / £50 GBP / $90 AUD. Pre-orders are available now, and doing so secures you the exclusive URBN Gear Pack, which comes with the following items:

The Surge launched in May 2017. Developed by Deck 13 Interactive and published by Focus Home Interactive, The Surge brought Souls-like combat to a mechanical wasteland with a twist: you can dismember enemies and use their parts against them. In our The Surge review, we said, "It bucks the trend towards creative bankruptcy, adopting some fresh ideas and layering those together with aesthetics, tone, and play to create an inspired adventure."

Based on the gameplay trailer, The Surge 2 looks to feature a similar gameplay loop to its predecessor. However, according to a Deck 13 statement, this sequel will feature "a sprawling, devastated city with larger and more ambitious level design, made possible by Deck13’s upgraded and improved engine."

If you're interested in pre-ordering The Surge 2 already, several retailers have listings up for the standard edition now. In addition to the general pre-order bonuses listed above, GameStop is offering a limited-edition exclusive, which comes with an exclusive sleeve and cover, an eight-page comic book, a double poster with artwork and the game's map, and three lithographs.

Some links to supporting retailers are automatically made into affiliate links, and GameSpot may receive a small share of those sales. 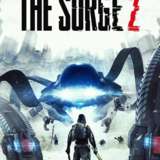