Supernatural's Complete Series Blu-Ray Is A Love Letter To Fans

With Supernatural on The CW ending earlier this year, the complete series is arriving on Blu-ray and is stuffed with extras many fans will be happy to get their hands on.

It's been months since Supernatural ended its impressive 15-season run on The CW. Now, thanks to a new Blu-ray set of the complete series releasing on May 25, fans will be able to revisit the series, while also enjoying a slew of new and previously released special features and bonus material.

While you can watch Supernatural on Netflix or buy it digitally at the outlet of your choice, the new Blu-ray set seems to have been crafted as a love letter to the fandom. When you watch the show digitally, you're getting just that--the show. There are none of the bonus features released on Blu-rays and DVDs that were made available over the last 15 years. This new set, though, has practically everything that's been released for the show since its launch. That includes a large number of San Diego Comic-Con panels--including the Kansas performance from 2017--deleted scenes, behind-the-scenes featurettes, and a long list of other content fans would probably like to have in their possession.

Along with the previously released material, this new set also offers bonus features from the final season of the show. There is a series of short documentaries about making Season 15, a retrospective on the Winchester brothers, and the show's final appearance at Comic-Con. That material can also be found on the Season 15 Blu-ray release. 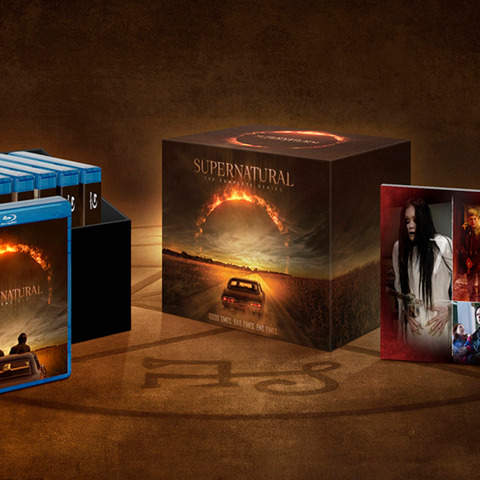 Supernatural: The Complete Series is available on May 25, and includes all 15 seasons of the series, as well as a long list of special features. It's available on Amazon for $290.

What's exclusive to the complete series is a booklet, which includes descriptions of all 327 episodes. In addition to that, the pages have a guide to the show's use of classic rock songs, a collection of rare photos from over the years, concept art, archived interviews, and two letters written to the Supernatural family of fans. Those letters come from longtime showrunner Bob Singer and none other than series creator Eric Kripke, who left the show after Season 5. Both are dated December 2020.

In his letter, Kripke writes of the fans, "I remember when I was the only one. I remember when it was just a single flame. But you made it your own, made it bigger and better and messier and wilder and more loving than I ever could've imagined. You believed in it. You made this single flame into a massive bonfire that warms people when the night gets cold."

Supernatural: The Complete Series is available on Blu-ray on May 25. And if you still want to watch it digitally, the set also comes with a code that'll enable you to do so.