The Mushroom Kingdom's crown princess now has her own DS platformer, and we plunged into the impending English version to very inoffensively fight some goombas.

Mario must have finally gotten sick and tired of having to save the girl over and over, because he has let down his guard and gotten himself kidnapped in Super Princess Peach, a new DS platformer starring the eponymous damsel in distress. A few months ago, we jumped into the import version of the game to see what sort of mess Peach had gotten herself into, and now we're playing a prerelease English version to see what Nintendo has in store for DS-owning, platformer-loving fans of action games. And pink dresses. Hey, it's a free country.

It doesn't look like much has changed in Super Princess Peach since the import came out--but, of course, it's nice to know exactly what's going on now. It seems nefarious old Bowser summers at his posh villa on the lush Vibe Island, and while he's chilling on his throne one day, some of his servants bring him the fabled vibe scepter. This mysterious artifact gives the old koopa's minions the power to infiltrate the Mushroom Kingdom and steal Mario and Luigi away. As it turns out, Peach happens to be away from the castle while this dirty business is going down. Once she returns, she realizes there's nobody else to cry to, so she hikes up her skirt and sets off for Vibe Island to teach Bowser a lesson and bring the normally heroic plumbers home.

As in the import, you'll be armed with Perry the sentient umbrella as you run, jump, and butt-stomp your way through all of Vibe Island's myriad, colorful lands. Most enemies can be dispatched by jumping on them, or you can use your umbrella to whack them out of the way. You can also pick up enemies and consume them to add to your vibe bar. Your what bar? Peach has four "vibes" at her disposal, and they're tied to specific emotions. The sad vibe lets you cry a geyser of tears, for instance, while the anger vibe engulfs you in flames. The glee vibe actually lets you fly for a little bit. These moves aren't really suited for combat, but obviously they have plenty of puzzle-solving applications, and the designers have thrown in a ton of ways for you to use the vibes to interact with the environment and open a path for you to progress.

The action in Princess Peach so far is straight out of the Mario textbook, with blocks to smash and everybody from goombas to bullet bills, and dry bones to Lakitu making an appearance. There's a forested land, a haunted house, an icy area--pretty much everything you'd expect out of a Mario-styled platformer. Nintendo has done a good job of coming up with new puzzles in each successive level, so things have been consistently interesting. The bosses we've seen generally challenge you to use your vibes in creative ways, too. Admittedly, the game is quite a bit easier now that the text is in English--optional hints pretty much tell you exactly what to do before a lot of new puzzles--but the design is inventive all the same.

One thing we've noticed now that we can read everything in the game is just how large Peach's repertoire of moves really is. Like all the Mario games, you'll collect coins in each level, but instead of turning them into extra lives, you can take these coins to Toad's shop in between levels and buy new moves, as well as upgrades for your health. In addition to the standard attacks and the four vibes, you'll get things like a ground pound, which lets you stun enemies nearby; a glide move that lets you slow your descent after a jump; and a projectile attack that lets you swing your umbrella to send a wave at your foes. You'll also pick up even more moves during relevant levels--in one, you can use your umbrella as a hook to ride down a zip line to cross a big gap.

There's also a surprising amount of bonus stuff in Super Princess Peach, although most of it serves as a very fleeting diversion from the main game. You'll collect a few Toad-oriented minigames that you can play between levels. By using the stylus, you can help clear the screen of frantic mushroom retainers, or you can blow into the microphone to make Toad jump over obstacles. You can also collect jigsaw puzzle pieces during the game, and once you have all the pieces for a particular puzzle, you can go into a menu and solve it. Finally, you'll collect "scores" that can be accessed in the music room--these merely let you replay the music and sound samples at will. None of this stuff is incredibly compelling, but it's nice that completists will have something to go back and collect after they've finished the main game.

The DS had a banner year in 2005, and it looks like this year is starting off just as strong for Nintendo's shockingly successful handheld. Super Princess Peach looks to have the right mix of classic platforming and neat new concepts to keep fans of side-scrolling action entertained for its duration. The game is due out in late February, and we'll be back with a full review then. 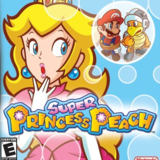