"I have many ideas in mind but my hope is to create a new Monkey Ball title."

Super Monkey Ball Banana Blitz HD recently returned the long-dormant series to modern consoles, albeit with a remaster of a Wii launch title rather than a brand new game. In an interview with Crunchyroll, director and producer Masao Shirosaki has said that this was the best option for the "limited time and budget" that they had, but that he's hoping it will do well enough to ensure a future for the series.

Shirosaki directly says that he hopes that next title he works on will be another Monkey Ball, once they're done porting Banana Blitz HD to Steam. "As for my next project, I have many ideas in mind but my hope is to create a new Monkey Ball title," he says. Shirosaki also worked on the Yakuza series, and when asked if those games could ever cross over into Monkey Ball, he says "if there’s an opportunity to create an all-new Monkey Ball title, I wouldn’t mind featuring Kiryu or Majima as guest characters."

We gave Super Monkey Ball Banana Blitz HD a 5/10 in our review, writing that "a glimmer of what made the series great remains, and it's enough to make us hope that someday we get a new entry that properly returns the series to its roots." 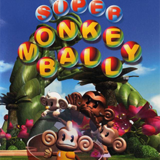