We check out Sega's chimp-tastic sequel to its original GameCube hit.

For those unfamiliar with the original game's formula for success, here's a primer: Take a monkey, stuff it into a plastic ball, put it on a vast board with a number of Dole bananas and a goal point that is tantalizingly out of reach, garnish with a ton of minigames and excellent multiplayer options, and let the hilarity ensue. The simple but addictive premise and accessible controls that are key to the game's appeal (well, aside from the monkeys) have been left intact, but rather than rehash the original game, Amusement Vision has actually overhauled a number of the original's elements and beefed it up considerably.

Before we go into all the additions, we'll fill you in on what hasn't changed. The count of selectable monkeys holds steady at four, with Ai Ai, Gon Gon, Mee Mee, and Baby all returning in their shiny plastic balls with no visible air holes. The basic structure of the overall game has been left largely untouched--you'll still find two modes, main game and party game, to choose from. Each mode offers a selection of different games to play through. As before, you'll earn play points in the main game that will let you unlock games in the party game mode. The core gameplay has also been left alone. You'll still manipulate the board your monkey is on to collect bananas and send him or her through the goal on the opposite end of the playfield. As you'd expect, if you're familiar with how Super Monkey Ball plays, you'll have no troubles getting into Super Monkey Ball 2.

However, as mentioned above, Super Monkey Ball 2 brings a number of new things to the table. In the main game mode, you'll find a story mode in place of the original's arcade mode, as well as the standard challenge and practice modes. The story mode lays out a massive challenge of 100 maps spread out over 10 themed worlds. In keeping with Sega's fruity leanings, the worlds in the game range from standard fare, such as Jungle Island, Volcanic Magma, Under the Ocean, and Amusement Park, to the quirky, such as Space Colony and Clock Tower Factory, and the bizarre, such as Inside a Whale, Boiling Pot, and Bubbly Washing Machine. Another new element introduced in the story mode is a plot that reveals the quartet's motivation for all the ball rolling and banana collecting. As you progress through the game and journey to new worlds, you'll be treated to cinemas that frame the action. The mode's first cinema shows the villainous Dr. Bad Boon rolling up on monkey island in his blimp and sucking up all the bananas, much to the locals' dismay. The fantastic four, after seeing the banana carnage, set out to recover the stolen fruit. Eager to hold on to his loot, Boon hides the bananas throughout his labyrinths. The ensuing cinemas are some of the most absurdly bizarre and funny things we've seen in a while.

The mechanics of the story mode differ a bit from those of the old arcade mode in that you're no longer forced to go through a world's 10 maps in order. Instead, you'll be able to pick which map you want to clear. To aid your decision making, each map will have its difficulty rated on a scale of one to 10 bananas, with one banana being a cakewalk and 10 being a sweat-inducing nightmare. Another difference is the lack of a life counter in the story mode, which lets you continue as often as you'd like. While you might think infinite continues would make the game too easy, don't get your hopes up--the ability to continue all the time just means you'll probably be able to watch your screeching monkey plummet to his or her doom even more often. The challenge mode is a survival mode that lets you see how far you can get on a series of maps that become progressively more difficult, and the practice mode lets you perfect your navigation skills on boards you've already cleared.

The other major additions to Super Monkey Ball 2 can be found in the party game mode, which now features a whopping total of 12 games to play. When you first fire up the game, you'll have access to overhauled versions of the six games found in the original Super Monkey Ball: monkey race 2, monkey fight 2, monkey target 2, monkey billiards 2, monkey bowling 2, and monkey golf 2. All six games now feature enhanced gameplay options and almost feel like new games. In addition, if you manage to collect enough play points while playing through the story mode, you'll be able to unlock six all-new games: monkey boat race, monkey shot, monkey dogfight, monkey soccer, monkey baseball, and monkey tennis. Monkey boat race has you paddling a boat (by alternating left and right trigger presses) through an obstacle- and curve-laden course set on a river. Monkey shot is a hilarious monkey-centric riff on Sega's Virtua Cop series that offers three courses of increasing difficulty to go through. Like the Virtua Cop series, the game is a rail shooter that requires you to move a cursor around the screen and shoot incoming enemies and an end-level boss. Clearing one course will open the next zany one. Monkey dogfight is airborne simian combat, with you controlling your chimp from a third-person perspective, collecting power-ups, and trying to take out your opponents. Monkey soccer is its own self-contained soccer game starring monkeys in balls. You'll pick one of three team formations--normal, offensive, and defensive--and hit the field. Monkey baseball has you hitting a ball into the pockets that line the field or out of the stadium to move runners around the bases. The twist is that, before a game, you'll play a roulette game to determine the conditions on the field during your time at bat. If you luck out, you'll be rewarded with ramps on the field that will make hitting a home run much easier or having all pockets on the field result in base hits. Finally, monkey tennis is exactly what it sounds like--monkeys, in balls, playing tennis. You'll have your choice of playing a singles match, a doubles match, or a tournament.

Graphically, Super Monkey Ball 2 is a significant improvement on its predecessor. The overhauled graphics engine now features a higher frame rate, higher detail, and even more special effects. The game's stars, the monkeys, have never looked better, with clean, cartoony models that feature animated faces. Their animation has been tweaked, offering a host of new and bizarre dance steps during their victories and on the menus, which feature animated monkey cursors. Newcomer Dr. Bad Boon stands out a little--he is based on a baboon, after all--but he actually features a bit more detail than the main characters. But as nice as the various monkeys are, the game's backgrounds are truly impressive, featuring significant upgrades on the backgrounds found in the original games. Detail is extremely high, and the animation is excellent, which is a sharp contrast to the mostly static backgrounds found in the original. You'll also find ambient effects--such as particle effects and heat haze in the volcano level--that really add to the game's overall look. The absolutely insane new maps in the game are also a good showcase for the game's graphics, with a blood-curdling number of warping map segments and falling obstacles to contend with. The game's audio department has seen some upgrades as well. The soundtrack is a peppier collection of tunes than the previous game's soundtrack, and it fits the game very well. In addition, the monkey's "voices" have also been improved, which makes the story mode cinemas even more amusing and their falling deaths even more traumatic.

So far, Super Monkey Ball 2 looks as though it's going to top its predecessor on every level. The only criticism we could throw at our preview build is that we wish there were more playable monkeys. The original quartet is still as lovable as ever, but it would be nice to get some new blood into the mix. Other than that, the party games, improved graphics, and story mode give Super Monkey Ball 2 a charm that's going to be hard to resist when it hits this August for the GameCube. 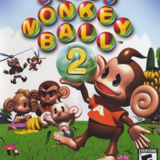