You can play the Super Meat Boy auto-runner sequel through the Epic Games Store right in time for Christmas.

The brief trailer consisted mostly of gameplay footage--surprisingly without the many, many deaths that define the game--along with some cute animated segments starring Meat Boy, Bandage Girl, and Dr. Fetus. It's now available to preorder, at 10% off until it launches. It will regularly cost $20, but the discount brings it down to $18.

The date is only for the Epic Games Store, and the trailer was released through Epic's channel, so other platform release targets have not yet been announced. No release date has been given on Switch, so it appears the plans to release first on Switch may have changed. This may be a timed exclusivity period, which could mean we'll see it appear on Steam and consoles sometime next year.

Super Meat Boy Forever makes some changes from the first game, most notably that it's an auto-runner. That means Meat (and now, Bandage Girl) will always move at top speed, and you'll be responsible for timing your jumps, kicks, and slides. But don't worry; it's still hard as hell. 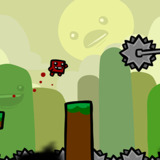