Wii's retro-gaming service attacked by land, air, and sea, via NES classic, Ecco: The Tides of Time, and Dragon Spirit.

Nintendo aficionados will be quick to point out that Super Mario Bros. 2 wasn't initially part of the Mario universe. While a proper SMB successor was released in Japan in 1986, the SMB2 released two years afterward in North America is actually a retextured Japanese game named Yume Kojo: Doki Doki Panic. As such, Mario's second adventure diverges greatly from his first. This time out, players control Mario, Luigi, Princess Toadstool, and Toad as they voyage into dreamland to defeat the menacing Wart. Super Mario Bros. 2 is rated E for Everyone and costs 500 Wii points ($5).

Sega's follow-up to Ecco the Dolphin, Ecco: The Tides of Time, again follows the titular bottlenose in his fight to thwart the evil plans of the Vortex Queen. Adding a surreal element to Sega's technically impressive series, Ecco travels through time, one side-scrolling screen after the next, while solving puzzles and defeating enemies using his occasionally deadly dolphin tactics. Ecco: The Tides of Time is rated E for Everyone and will set gamers back 800 Wii points ($8).

Namco's Dragon Spirit rounds out the week. In this vertical-scrolling shoot-'em-up, players assume the form of a blue dragon and fight to rescue a princess in peril. Over the course of eight areas, players will use breath attacks and fireballs to fry flying and ground-based enemies. Dragon Spirit is rated E for Everyone and runs for 600 Wii points ($6). 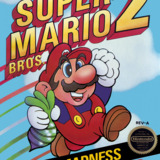