I've always wondered what Rocket League would be like with a little Apex Legends or Overwatch infused into it. 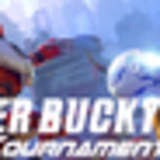 The open beta for Super Buckyball Tournament is now live on Steam until December 24, giving players a chance to jump into the online multiplayer sports game. GameSpot got an invite to test the game out ahead of the beta's start and after playing SBT for a few hours, I'm a fan. The two games I have spent the most time with on my Xbox are Rocket League and Apex Legends, so SBT's diverse roster of hero characters injected into a physics-based soccer game is entirely my shtick.

SBT is an arcade soccer game featuring a single-player career mode and online matches of three-vs-three and four-vs-four. Mechanically, the game is quite simple--you don't have to worry about all that many controller inputs beyond jump, shoot, sprint, tackle, and pass. But the skill ceiling for SBT seems to be very high, with complexity created by how well you understand the physics engine of the game and how to use the aforementioned moves in conjunction with your teammates.

Getting past a good defender can be accomplished by changing the tempo of your shot, for example. Holding the button to shoot makes the shot more accurate, providing you more control at the cost of giving the defense another second to set up and react. But you can just as easily shoot the ball the second it's passed to you to pull off a faster and less accurate attack, and the option of two different kinds of shot opens up the possibility of faking your opponent.

And the complexity doesn't stop there. You can also start the motion of your shot before your teammate has passed the ball--if correctly timed, you'll launch the ball as soon as it connects with you. Teams that can master that timing open up the strategy of using decoys, as the defender is now forced to consider all attacking players as viable threats until the shot is actually taken.

All that alone already makes SBT a pretty fun arcade soccer game, one where teamwork is typically rewarded with incredible plays (it's a shame the beta doesn't have a replay function after goals or a "play of the game" feature to congratulate players, because there were several times while I was playing where I wished everyone could witness how cool I was). But SBT goes a bit beyond your traditional arcade sports game with the implementation of hero characters, adding abilities that can fundamentally shift the course of a game in a variety of cool ways.

I'm particularly fond of Sky, a character with great speed and ball-handling skills who has the ability to dash backwards, giving her an additional direction when it comes to dodging enemy tackles and providing a means of creating space if an opponent rushes while she's trying to pass or shoot. Her ultimate ability is also incredibly fun, as the tai chi master summons two swirling beams of energy to carry the ball in a twisting spiral--it's hard to block unless a goalie uses one of their own abilities to counter it.

Hero abilities are explained in SBT's story. In the world of SBT, human augmentation has become common, and the growing number of athletes choosing to better themselves via cybernetics and genetic manipulation has caused the banning of enhanced individuals from most competitive sports. With so many enhanced athletes, an idea was created to make a sport entirely geared toward the use of superpower-like abilities. And thus, Buckyball was born.

All of which is why SBT features a roster of playable characters that includes everything from a weretiger to a DJ with speakers for hands. Characters are divided into one of three classes: Forward, Balance, and Defender. Forwards (like the aforementioned Sky) possess skills geared towards offense, Defenders specialize in blocking shots, and Balance characters take on a more supportive role that can aid the other two types.

I like that the hero abilities and character classes reinforce teamwork and good spacing on the field--if you're playing as K1-D, the always-smiling robot Defender, your job is to plant your butt in front of your goal and make sure the opposing team doesn't score. Can you use K1-D on offense? Sure, but that's not where he specializes. And because every character has abilities best suited for specific roles, SBT encourages players to contribute to the team's success by sticking to their role. This helps prevent teammates from all chasing after the ball and scrunching up too much.

The only major aspect of SBT that gives me pause right now is its narrative. As it's still in beta, there are aspects of the game that haven't been finished, so it's difficult to discern whether more story is coming or this is all that there will be at launch. SBT has a pretty cool-looking cast of characters, but they're all a little lifeless right now without much in the way of voice acting or storylines. Other hero-based games--like Apex Legends and Overwatch--have thrived for having both rewarding gameplay and characters that are easy to fall in love with. Most of why you want to keep playing those games is because they're fun, but there's also encouragement to keep playing in order to unlock more cosmetics for your favorite hero. From my time with SBT, it sure seems to have a solid gameplay concept on its hands, but I'm not yet convinced it possesses the narrative draw to bring in players who may now want a little story to go with their online multiplayer game.

Super Buckyball Tournament is currently in beta, exclusively available on Steam. The game is scheduled to launch for Steam Early Access in 2022, before then fully releasing for Xbox One, PS4, Switch, and PC later in the year.