We get our hands on the Japanese import of the fourth chapter in this popular Konami RPG series.

Suikoden IV is the fourth entry in Konami's popular role-playing game series that features 108 characters in each title. We got our hands on the recently released Japanese import of Suikoden IV for the PlayStation 2 and checked out what's new with this entry in the series.

In Suikoden IV, you take the role of the main character, an orphan who worked as a servant for the Fingerfoot family, which governs the country of Gaien, where the game starts out. The young son of the Fingerfoot family, Snow Fingerfoot, has been your lifelong friend, and you are training together to serve in the Knights of the Sea army that protects Gaien.

The game begins as you and Snow go through your last training to become official soldiers of the army. After a night of celebration from getting accepted into the Knights of the Sea, you and Snow go on your first mission to guard a shipment of herbs. Snow discovers that the cargo isn't actually herbs but rather rune ammunition that's bigger and more powerful than anything he has seen before. What's worse, the ship gets ambushed by deadly pirates. Despite being assigned as the mission leader, Snow loses his cool and flees in an escape boat, leaving you and the rest of the crew to fend for yourselves. While you and the crew manage to beat the evil pirates and their vicious Captain Brand, Brand suddenly raises his hands and uses a mysterious force to turn everyone into ashes, except for you, for some unexplained reason. You're then left on the boat to duel with Brand. Fortunately, the army's general, Glen Cott, rescues you from the captain at the nick of time.

The story begins to take a twist from here. Captain Brand turns out to be the possessor of the Rune of Punishment, which is one of the 27 runes in the Suikoden series. The Rune of Punishment is bestowed with powerful magic, but it's also a bit cursed and drains the life of its user whenever it is used. The rune also has a distinct characteristic of picking someone nearby as its new host whenever its possessor dies. Upon slaying Captain Brand, Glen inherits the powerful, but cursed, rune. While the pirates are defeated and everyone is saved, the incident causes a rift in the friendship between your character, who stayed to fight, and Snow, who chickened out. After they return to land, a seemingly endless fleet of pirate ships attacks the harbor where the Knights of the Sea are situated. Having no option other than to back down against the pirates, Glen uses the power of the Rune of Punishment to annihilate them. But Glen dies as a result of using the rune, and you, one of the only two people nearby to witness Glen's death, become the new possessor of the rune. Snow, who was also witness to Glen's death and your inheritance of the rune, reports it to his father. Shortly after, you are charged with murdering Glen and are exiled from Gaien, which is where your adventure in the game begins.

Suikoden IV takes place 150 years prior to the first Suikoden. Some characters from past installments in the series will appear in the game, such as Jeane and Viki. Since your character is a solider of the sea, Suikoden IV takes place as much at sea as it does on land. The controls are fairly conventional. You walk around by tilting the left analog stick and talk with people or search nearby objects by pressing the circle button. Holding R1 while walking will allow you to dash faster than just tilting the analog stick all the way, while holding the X button will make you walk slowly. An addition to Suikoden IV that makes it significantly different from other RPGs is that while the game has quality 3D graphics, it lets you change the camera angle freely by using the right analog stick. Further, the L1 button lets you change the screen angle to a first-person view, so you can experience the game from the perspective of the game's main character.

While at sea, you can navigate your ship by using the left analog stick, and you can press the R1 button to increase traveling speed. The L1 button can be used to switch the camera angle between three different views: north view, which fixes the camera to face north; top view, which gives an overhead view of the ship and its surroundings; and free view, which allows you to change the camera angle with the right analog stick like on the field map. You can press the R2 button for a minimap that can be referenced while navigating the ship, or you can press the triangle button for a full-screen map. While the navigation map is essential for not getting lost at sea, it's also pretty empty when you start off, because you can only see islands that have been marked for a mission or quest or those that you've passed by and discovered. You can switch the screen to the ship's interior whenever you want, which will let you explore your vessel and talk to its crew.

In Suikoden IV, random battle encounters take place both on land and at sea. You fight using a party of four characters in a standard turn-based battle system. Aside from the usual weapon attacks and magic, Suikoden IV has a number of systems that spice up the fights. There are partner attacks that can be executed with two or more characters when their friendship parameters are high; for example, the main character and his friend Snow can do partnership combination attacks at the beginning of the game. Characters that have level-four magic can combine spells with another party member to create different combinations of spells that can inflict devastating damage. There's also a command that lets all party members attack at once. You can escape from the enemies by selecting the money command and bribing them, or you can try to flee with the traditional escape command, which doesn't cost any money but isn't always successful. We did notice that there are plenty of battles, and Suikoden IV's rate of random encounters seems to be higher than in other RPGs.

Suikoden IV also features a battle mode where you fight against other ships in a turn-based, simulation-style system in which you move your vessel through a map that consists of square cells. If you're in range to hit the enemy's vessels, you can shoot them with what's called a "rune cannon," which is basically a cannon with a nature element attributed to it. The nature element depends on what character you've assigned as your cannon gunner; for example, if you picked a character with a fire element, you'll shoot cannons that have a fire attribute. It's important to keep this in mind, since enemy vessels can shoot back at you with an opposing element to counter your attack, or they can cancel the damage by shooting a cannon with the identical element. You can do the same when enemies attack you, of course. Also, keep in mind that cannons are located only to the sides of vessels, so if you position the side of your ship to face toward the enemy vessel's bow or stern, you can damage them without getting countered. If your boat gets close to the opponent, the screen switches to the usual battle system, and you go into a fight where you can only select attack or defend in outright melee combat until one side loses all its characters. An important note about sea battle is that there's a chance that if your characters die, they'll never be seen again in the game, though that happens only with certain characters, and it happens only rarely.

Similar to past releases in the Suikoden series, Suikoden IV also has duel battles, where you fight a rock-paper-scissors style of battle by attacking, defending, or using a special attack. Enemies telegraph their next attack with their speech in duels, so memorizing their quotes will eventually lead you to beat them.

The home base has been a tradition in the Suikoden series, and Suikoden IV features a huge ship that will serve as home for you and the 107 other characters in the game. Of those characters, about half will actually be usable as party members. Characters who won't join the party will help in other ways, such as by supporting your party in battle, by serving as a rune cannon gunner, or by assisting you at home with different services. Minigames in Suikoden IV range from dice throwing to a mahjong-like game, which can earn you some rare items as well as extra money. The quality of the minigames is very high, especially considering that they're side games that basically don't have to do with the main part of the game.

If you're looking for an RPG for the PS2 to play, and you can understand the Japanese language, Suikoden IV may be worth picking up. Fans of the series should note that you can't transfer saved data to Suikoden IV from previous games in the series. Konami plans to release an English version of Suikoden IV for the North American market early next year. 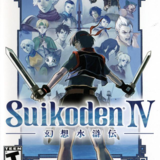