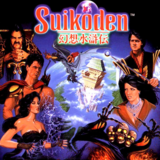 The original PlayStation is renowned for its diverse library of games, but no genre is as synonymous with the system as JRPGs. In its five-year lifespan, the console produced a staggering number of instant classics, including three beloved Final Fantasy games, Chrono Cross, Vagrant Story, and Suikoden II, among others. Yoshitaka Murayama, the original creator behind the latter, is hoping to recapture that golden era of JRPGs with his next venture, Eiyuden Chronicle: Hundred Heroes.

Earlier this year, Murayama and a handful of other industry veterans founded Rabbit & Bear Studios, an independent development studio based in Tokyo, Japan. The company's first project, Eiyuden Chronicle, is a classical turn-based RPG forged in the mold of Suikoden II.

"The first thing we decided when our members came together was, 'It's about time we made a really interesting game that we ourselves want to make,'" Murayama said in a press release. Perhaps unsurprisingly, Eiyuden Chronicle revisits the themes and aesthetic that defined his PlayStation-era work.

The visuals in particular evoke the feel of Murayama's PS One classic. The game features a striking 2.5D graphical style that's reminiscent of Octopath Traveler, Square Enix's own consciously retro RPG. This likeness isn't coincidental. "From a graphical perspective, Octopath Traveler has inspired us and given us hope that there is a mid-point between new and old that a wide audience can appreciate," Murayama tells GameSpot over email.

Working alongside Murayama on the project are other Suikoden veterans Junko Kawano (Suikoden, Suikoden IV) and Osamu Komuta (Suikoden Tactics, Suikoden Tierkreis), as well as Junichi Murakami (Castlevania: Aria of Sorrow). For Murayama and Kawano, Eiyuden Chronicle marks the first time in 25 years that the two have collaborated on a project, but that long gap has not been a hurdle. "I wish I could say we've all grown and changed in many ways but it feels like nothing has changed in the last 25 years!" Kawano says. "But it definitely feels like you are seeing long lost friends from your hometown that you have missed dearly. I'm sure it feels like some strange time-warp."

Like its spiritual predecessors, Eiyuden Chronicle's story is told against the backdrop of war. The game follows a young warrior named Nowa and his friend, Seign Kesling. Nowa hails from a small village in a remote corner of the League of Nations, while Seign is an imperial officer for the Galdean Empire, a militarily advanced nation that has discovered how to amplify the magical powers of an artifact called "rune-lens." With this power, the empire is marching into the other territories around the continent of Allraan in search of more artifacts that can be used to bolster its hold over the land.

As fate would have it, Nowa also happens upon a rune-lens while out on a mission, and the discovery will ultimately ignite a confrontation between the League of Nations and the Galdean Empire--and test his friendship with Seign. This is a theme that has long intrigued Murayama. "One of the main themes I like to focus on is 'What is a hero,' but also, how do friendships and relationships affect the course of history?," Murayama says. "A single choice to stand up for a friend or alliance can be the spark that starts a world-altering war. I find that terribly interesting."

Suikoden's signature hallmark is its expansive cast; every entry features more than 100 unique recruitable characters, each of whom plays a role in the overarching story, and it's clear from the subtitle that Eiyuden Chronicle will continue that tradition. Much like Suikoden, the game will have 100 heroes to recruit, and as these characters join your ranks, you'll gradually build up a fortress base. Naturally, coming up with backstories and unique personalities for such an extensive cast is a challenge.

"Of course it's a major hassle," Murayama says. "You not only have to create 100 characters and their backstories but additionally how they all relate and the role they will serve. It's an incredibly complicated web. And even from the beginning, as the subtitle states, this is a tale about heroes. So our hope is to work with the community to build out these very heroes very much as the community also organically grows."

For Kawano, who serves as Eiyuden Chronicle's lead artist and character designer, this expansive cast list presents a different sort of challenge. "It's not hard to create new characters," Kawano says. "In a title like this where you have to create a huge amount, it's more about endurance. Especially towards the end of development… you are cramming so many things in last- minute. However, the hard part is after you are done and out of 'runway' you invariably feel like you missed the opportunity to add this character or that character. So that regret is the worst part."

Although Eiyuden Chronicle deliberately harkens back to Suikoden and other classic JRPGs in many ways, Murayama hopes the game will be viewed on its own merits. "I don't want to be defined by my past," he says. "This game represents an extension of some of the gameplay and systems that I have honed over my many years as a game developer, but it is a new title and needs to stand on its own.

"Eiyuden represents a major challenge for us. At the core of that challenge is for us to make a game that is intensely satisfying and just flat-out fun. While many people have doubts and issues with crowdfunding and Kickstarter, it still remains the best chance an old creator like myself has to own IP and to interact with a serious group of fans who are investing in the project from the ground up. Something that takes serious commitment. It may sound cheesy but it's easy to doubt and be negative. It takes a true hero to believe in something."

Rabbit & Bear is raising funds to develop Eiyuden Chronicle through Kickstarter. The crowdfunding campaign runs until August 28, although it has already proven to be an overwhelming success; donations blew past the studio's original $500,000 goal in only two hours and hit the $1 million stretch goal to bring the game to consoles in less than a day. The team is humbled by the positive response from fans, writing on Twitter: "I can't believe it was funded so quickly! Many people have no hope in Kickstarter so I was so afraid. Thank you so much my heroes!!!! I will make a great game for you!"

Eiyuden Chronicle is tentatively planned to launch in Fall 2022.