The endless runner arrives this May.

Publisher Nicalis has announced a release date for Runner3, the upcoming installment in the acclaimed Bit.Trip series. The stylish rhythm/action game will launch for Nintendo Switch and PC on May 22, and players will have the option to pick it up either digitally or at retail for the former platform.

Like the previous two Bit.Trip Runner titles, Runner3 is an auto-runner that takes players through a variety of surreal levels. In addition to series mascot CommanderVideo, players will be able to play as CommandgirlVideo and "numerous friends [and] top-secret guest stars." Nicalis has also confirmed that Mario voice actor Charles Martinet reprises his role as the narrator in Runner3. You can watch a new trailer for the game below.

Runner3 will be available both digitally from the Switch Eshop and as a physical release. Along with a game card, the packaged version includes a full-color instruction manual, a miniature sampler soundtrack, and a light-up CommanderVideo character strap. "More info about other platforms" will follow at a later time.

Runner3 was first officially showcased back in February 2017, during an indie-focused Nintendo Direct presentation. The game is being developed by Choice Provisions (formerly known as Gaijin Games), the studio behind the previous Bit.Trip titles.

Runner3's predecessor, Runner2, was very highly regarded when it first released on Wii U. The game was awarded a 9/10 in GameSpot's Runner2 review. Critic Chris Watters said it "ensnares your emotions with an artful cocktail of music and gameplay, sweeping you along in its rhythm and lighting up a smile on your face." 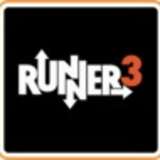