Stunning Boba Fett Mayan-Inspired Bust Is Up For Preorder

The limited-edition bust is available to preorder exclusively at Sideshow.

There's a near endless supply of Star Wars collectibles, but we haven't seen one like the new Boba Fett collectible that just went live for preorder at Sideshow. The limited-edition collectible is a Boba Fett bust with a Mayan-inspired design. It's available to preorder now for $165 and is expected to ship early next year. 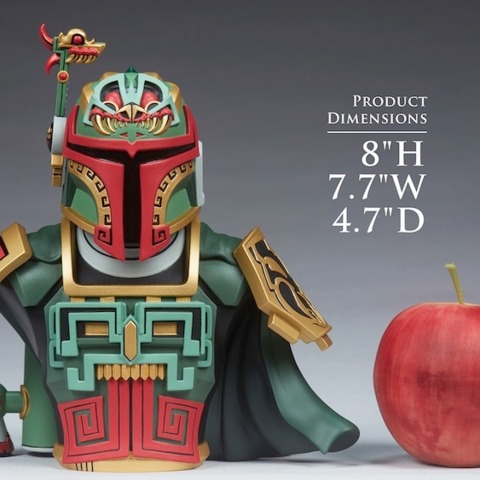 The bust accents Boba Fett's green armor with red and gold plates with symbols and designs paying homage to Mayan culture. It was designed by Jesse Hernandez, a visual artist based out of San Francisco. At only 8 inches tall and 7.7 inches wide, the bust is pretty small, so the level of detail featured here is quite impressive. It's important to note that the images shown here are from a prototype, so it's possible the final product could look slightly different.

Sideshow's bevy of cool collectibles sometimes sell out during the preorder stage, so we wouldn't be surprised if this Boba Fett bust sells out well before its release.

If you want a traditional Boba Fett bust, there is another option at Sideshow. A life-size Boba Fett bust (approximately 30 inches) is launching in the next few months. It's still available to preorder for a whopping $1,300. If you're a fan of Star Wars villains, Sideshow also has plenty of Darth Vader busts as well as those of Kylo Ren, Darth Maul, and a Stormtrooper.