The director of the original Street Fighter has reflected on where the idea for Street Fighter came from--he was bored in a meeting and thinking about another game.

1987's Street Fighter was Capcom's first fighting game, and it was where the six-button control and input system that has been a huge part of fighting games ever since was invented. While the series became much bigger and better with Street Fighter II, the original is a very important game--and as it turns out, it was first envisioned by the director when he was bored in a meeting and thinking about past jobs.

In a new deep-dive oral history of Street Fighter on Polygon, game director Takashi Nishiyama has reflected on the game's creation, and how he started to conceptualize it during a meeting. "One day at Capcom, we had a meeting between the development staff and the sales team, and this particular meeting happened to run very long--I think it was about two hours," he recalls. "Personally, as someone on the development side, I found it very hard to stay interested during these meetings, so I tended to daydream and think about games."

Nishiyama says that the game came to him into this moment. "There was just this one moment where the idea for Street Fighter popped into my head and I drew it out on a piece of paper during the meeting," he recalls, saying that he showed it to Capcom producer Yoshiki Okamoto (who was sitting next to him) and it earned his approval.

The inspiration for the game came from an unlikely source--a game called Spartan X, known as Kung-Fu Master in the US, which Nishiyama had worked on while at developer Irem. "I was thinking about the boss fights in that game, and thought it could be interesting to build a game around those," he remembers. "I think you could say Spartan X was the basis of the whole idea for Street Fighter."

Spartan X is the Japanese name for the Jackie Chan movie Meals on Wheels, and the game was a loose adaptation of it. However, the only elements that really carried over where the main character and his girlfriend, and the plot was not the same as the film.

Nishiyama's notes taken during that meeting were used for the design document that got the game greenlit, and were used by planner Hiroshi Matsumoto to refine the game into the form it released in. By a certain logic, this means that Spartan X/Kung-Fu Master influenced the entire fighting game genre. 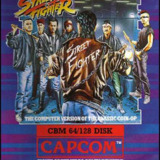