Gamers invited to join Capcom and Cospa at club dates and arcades to celebrate game's 15 years in release.

TOKYO--Character merchandise manufacturer and retailer Cospa will team with Capcom to help Street Fighter celebrate its 15th anniversary in style.

Not content with merely a stylish Web site celebrating the milestone, Capcom will also co-sponsor a series of club events featuring dance music based on the game soundtrack.

The two companies also plan a commemorative CD, Street Fighter vs. Street Musician, that will feature some of the recording artists playing the club events. But the biggest draw for hardcore fans will be consoles running Hyper Street Fighter II that will be set up at the venues, giving Japanese gamers an early chance to try out the game.

Of course, attending the events in costume is also encouraged, and the organizers have arranged a costume contest as well. The parties take off on November 15 in Fukuoka, November 16 in Osaka, and November 23 in Tokyo. 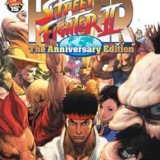