Strategy set for Tenka-bito on PS2

Sega is making a new Sengoku-era strategy RPG that has similar graphics to Kessen.

According to the latest issue of Famitsu, Sega is making a new strategy role-playing game for the PlayStation 2, titled Tenka-bito. According to the article, the game is currently 60 percent complete and is slated for release in Japan this winter. It will be priced at 7,140 yen ($65).

Tenka-bito takes place during Japan's Sengoku war period, and although it's a strategy role-playing game, its 3D graphics strongly resemble those of Koei's Kessen series. Specific system details on Tenka-bito haven't been revealed yet, but screenshots show that there are soldiers on foot and on horseback fighting all over the battlefield. When players repeatedly use the same battle units, they'll gain experience points and ultimately change to "upper-class soldiers" with more fighting power.

Gamers can choose to take the role of several historical warlords, including the ever-popular Oda Nobunaga. Though stages in Tenka-bito are based on historical grounds such as Odawara Castle, the battles might not necessarily follow the history books, since players ultimately decide which warlords go into battle. Tenka-bito features multiple storylines and cutscenes for each warlord in the game, which change depending on the results and conditions in the battlefield. Character designs for Tenka-bito were done by freelance artist Shishizaru, who is best known by gamers for his character designs in Koei's Crimson Sea series. 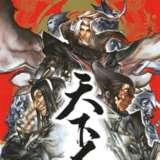