We take a look at Microids' upcoming murder mystery that artfully spans the decades.

Kate Walker's adventures in Syberia earned Microids a reputation for creativity, and now the Montreal studio has something very different in store with Still Life. Rather than follow the Syberia games' quirky, fantastic style, the new adventure takes a gritty, M-rated path following a pair of serial killers.

Still Life puts you in the shoes of not one, but two characters. We meet Victoria McPherson, a young FBI agent who is tracking her fifth murder in a serial killer case in modern-day Chicago. But when she takes a break at her father's home, she digs up some of her grandfather's case files and discovers that he had chased a serial killer decades ago when he was a private investigator in Prague. A cinematic elegantly transitions to Prague in 1929, and soon you'll be playing as the elder McPherson as he uncovers more and more coincidental similarities between the two cases.

The art team from Syberia II moved over to work on Still Life, and despite a darker theme, the quality and even some of the visual style carries over. The engine has been somewhat enhanced--with features such as real-time shadows for multiple light sources and 3D inventory objects that can be zoomed in on for close investigation--but it's the dense 2D backgrounds and dramatic character animations that still represent the core look. The environments are as diverse as ever, from the latest bloody crime scene to scenic Prague and a high-tech FBI headquarters.

Still Life is similar to Syberia in its basic point-and-click mechanics, but there are some notable differences, like the fact that the PC version can now be controlled either with the mouse or the keyboard's arrows. The conversation system is now a two-button affair, with one button moving you forward on a personal dialogue thread and the other taking a more professional route. We saw this in action as Victoria chatted with a street-talking beat cop, and the personal dialogue got quite colorful (though the swearing certainly wasn't censured from the cop's straight-up assessment of the crime scene, either). The expectation is that one thread will give extra character background while players who want to get right to the point can do so.

Another major gameplay addition is the full-screen inventory system, which will let players zoom in so close to objects that the printed directions or subtle clues are visible. It's expected that some puzzles will require combining objects in this view. The game's investigative focus naturally seems to set up a certain sort of puzzle. We watched as Victoria took charge of the crime scene and turned on a black light and used a forensic tool to uncover a clue. But there'll also be lots of conversational clues and story elements to pick up on from one character that carry over to the other.

The seven chapters will segue back and forth between Victoria and her grandfather, but the game's cinematics aren't there to set up the transitions. There's much more action coming in Still Life, but rather than speed up the adventure-style gameplay, the team decided to add in some movie-style cutscenes. One lengthy movie we saw had Victoria frantically chasing her masked suspect through the snowy streets and to a rooftop where she had a near-miss encounter.

Still Life has already been in development for well over a year, and the game is scheduled for release in late 2004. 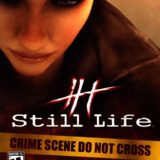