Steins;Gate 0 Is Out Now On Nintendo Switch, And My Darling's Embrace Comes West

Take the world of Steins;Gate with you.

Two new Steins;Gate games have come to the Switch, allowing you to enjoy more of the sprawling anime visual novel saga on Nintendo's portable console. One has been available on other systems for a while, the other is a new game that has come west for the first time.

In 0, you assist a group of young students in preventing World War III. It's a sequel, not the prequel the "0" might suggest, in which you explore an "Alternate Worldline" in which the characters in the original game gave up. The game is also available on PS4, PC, PS Vita, and Xbox One.

My Darling's Embrace is a "sweet and slapstick romantic comedy," according to the store page. It's focused on jokes over science-fiction, and you'll be able to change the course of events based on how you use your phone during the game.

Both games are available at a 10% discount until December 17, and cost $27 / £24 / $40.50AUD. Steins;Gate Elite released on the Switch earlier this year and was the only game in the series on the system until now. 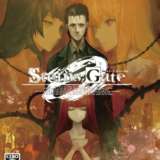