PC gamers flocked by the millions to Steam to ring in the new year, according to new player usage information from Valve. According to the latest Steam game statistics information, there were 5 million unique users concurrently logged on to the service earlier this week, representing a new all-time high.

The exact milestone of 5,012,463 players was tallied around noon on January 2. That represents significant momentum, as Steam amassed a then-record 4 million concurrent users in September 2011.

Launched in 2003, Steam is Valve's digital distribution hub, and it currently boasts 35 million users. Presently, there are over 1,000 titles from various publishers available for purchase and play through the online distributor. According to Steam's usage data, the top three most popular titles on the service are The Elder Scrolls V: Skyrim, followed by Counter Strike, and Call of Duty: Modern Warfare 3. 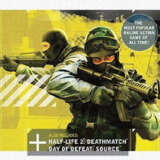