Indie game Stealth Inc: A Clone in the Dark is getting a limited edition physical release, developer Curve Digital has announced.

The boxed edition is exclusive to publisher Limited Run Games, and only available for PS4 and PS Vita. Be aware that the Vita edition will not work on PS Vita TV, however.

Stealth Inc was originally released on PC in 2011 as Stealth Bastard, before coming to iOS and PlayStation platforms two years later as Stealth Inc. Its sequel, Stealth Inc 2: A Game of Clones, was revealed as a Wii U exclusive in 2014. It later came to Xbox One, PS4, and PC.

We enjoyed the original here at GameSpot--critic Tom McShea awarded it an 8. For more, check out our full Stealth Inc review. You may even already own it, as it was included in the free monthly PS Plus games back in April 2014. 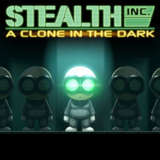