Microprose isn't including any resource management into this RTS game. Bruce Geryk examines how this will affect gameplay.

Few names in science fiction are as recognizable as Starship Troopers. Robert Heinlein's 1959 classic is about an arachnid threat to a united Earth that is halted by the efforts of the Mobile Infantry. The MI are the grunts that land on barren planet after barren planet - in a manner vaguely reminiscent of the American island-hopping campaign in the Pacific in World War II - digging the enemy out of their tunnels. This is certainly fertile ground for a computer game, and fans of both the book and the movie will be glad to hear that Hasbro Interactive plans to release a real-time strategy game based on Heinlein's creation later this year. Starship Troopers will incorporate elements of both the Heinlein book and the 1997 Paul Verhoeven film, even though the general look of the game already strongly resembles the movie in many respects - for example, the MI is transported to the planetary surface via shuttlecraft instead of drop capsules. Powered armor, on the other hand, which was missing from the film version, will make an appearance in the game - thus, the designers have clearly familiarized themselves with all aspects of the Starship Troopers universe.

Hasbro announced the release of Starship Troopers earlier this year, but little information has been forthcoming until now. The game is currently under development by Australia's Blue Tongue Software. We were able to take a look at a recent build, and although it wasn't fully functional, it definitely shows the direction the game is taking. Instead of trying to re-create either the book or the movie in exact detail, Starship Troopers will concentrate on re-creating, in game form, the central conflict of the story: Nasty bugs attack humankind, and humankind gets really pissed off.

The story consists of a linear plot of 20 missions, with success in one mission required for progress to the next. Troopers follow you from one mission to the next, and if they get killed, they are replaced by green recruits. There are fixed events that are explained through seamless narration using the game engine: At one point in a mission, a senior officer arrives via shuttle, and the game switches to a scripted sequence before resuming and placing the new unit under your control. The storyline is fairly standard: You'll advance through the war against the bugs, and after four separate missions, you'll end up on Klendathu, the bug homeworld.

Because Starship Troopers is about the marines of the MI, unit types are limited to infantry. However, there are several different types of units, and they can all be outfitted with a variety of personal weapons and armor. While there was no powered armor in the film, the game makes sure to represent the different classes of suits, including scout, command, and marauder-class powered armor. Each trooper has room for armor and up to eight other items, although some slots are restricted to specialists. For every six troopers (or fraction thereof), a squad leader slot is available. The MI arsenal includes plasma guns, chain cannons, light rifles, flamethrowers, and more, which are all carried separately.

Hasbro and Blue Tongue have made an effort to incorporate the latest in hardware acceleration features into Starship Troopers. For example, the game supports the transform and lighting (T&L) features of Nvidia's GeForce video cards. This is best demonstrated in the night missions, where each MI trooper has a light on his helmet that shines in front of him. The illumination itself is very realistic, adding considerably to the atmosphere. The terrain types range from bare rock to grassy plain to snow-covered ground - in general, they are reminiscent of Force Commander's. This is especially true of the close-in view - but even though there are several zoom levels, the camera aspect doesn't freely rotate in relation to your troops, and at this time, it is restricted to the four points of the compass.

The bugs' appearance is heavily influenced by the film, as is the appearance of the unarmored troopers. The unit animations are very smooth, and a lot of work has clearly gone into giving the game as clean and sharp a look as possible. Units with powered armor have a distinctive appearance as well, and the weapons animations fit into the overall Starship Troopers theme nicely.

Gameplay is generally straightforward: A shuttle will land your squad at the drop zone, and from there your mission is to either kill bugs or blow something up. Because Starship Troopers' large stretches of open ground are scarce, its terrain feels a bit similar to that of Command & Conquer. But in Starship Troopers, planets consist of a series of valleys and gorges, and you can view, but not move across, the adjoining cliffs. A strategic map pinpoints your position and camera facing, just as in Force Commander or Shogun. Some missions do incorporate more open terrain, with the Klendathu missions taking place on a vast, sandy desert with impressive cliffs and undulating sand dunes. The game plays very differently when you find yourself in these open spaces instead of in narrow valleys, so successful players will have to adapt their tactics to deal with specific tactical situations.

Like Force Commander, Starship Troopers lacks any kind of resource gathering. However, Force Commander allows you to "buy" units from a pool with accumulated command points, whereas Starship Troopers specifies the maximum number of troopers of each type and allows you to select from a pool of available infantry to build your squads. A strike team is chosen from the men available in your platoon, and limitations are set on the number of specialists and powered suits available, although within these limits you're free to equip each individual trooper as you see fit. Depending on the mission, you might find yourself in need of specialists to destroy the entrances to the bug tunnels that run underneath your mission sector, and in that case you'll need to equip your specialists with explosives to take them out. Our build didn't have functional specialists, unfortunately, although their purpose is clear within the game's framework.

The Interface and AI

The interface was undergoing a major redesign at the time this build was put together, and as a result many features weren't working as they will in the final version. There will be several ways to control your troopers. At its heart, Starship Troopers is a traditional RTS game, and the familiar click-and-drag method will be your main tool when manipulating your units. However, there are two additional features. For regular troopers, an aggression level can be selected to control how actively that unit searches for and engages targets. A high aggression level will result in your units moving all over the map in search of a target. A low aggression level will keep them in formation, so they will fire only when they are threatened. To control your squad leaders, there are a variety of squad commands such as changing formation, halting all units, turning helmet lamps on and off, and sending a scout ahead. Due to the general interface overhaul, this part of the game wasn't working quite right, and several squad leader commands ended up crashing the game. This is just a result of the game being a work in progress - even though it will obviously be fixed, it prevented us from trying out some of the tactical commands that the game offers.

Starship Troopers' unit AI is noticeably very good at picking out threats and firing on them. Even in the most passive setting, MI troopers will identify incoming bugs and target them with their weapons. In this respect, Starship Troopers is shaping up to be more of a squad tactics game than a straight RTS, although the addition of functional specialists will surely alter the gameplay. Troopers don't need to be given individual targets, and considering the game's speed, there sometimes isn't time for this. As a result, you'll often depend on your troopers to pick out attacking bugs and shoot at them even before they appear on your screen, especially if you've dropped down to one of the closer zoom views. Weapon selection and unit placement are important in situations like this, as a group of troopers needs a combination of short- and long-ranged weapons to deal with a horde of bugs attacking from all directions. There are various kinds of bugs for adversaries, including plasma bugs and brains. Brains become an important target in the latter stages of the game.

Starship Troopers is prepared to focus on one thing: Placing your infantry in harm's way and forcing you to fight your way out. Even though a strategic map shows your position in space relative to the bugs, it merely sets up the backdrop for the showdown against the arachnid menace, which is copiously narrated in the mission briefings. The game was originally scheduled to release this summer, but it has been pushed back to the fall. When the MI are finally set to invade, we'll be there to give you the latest. 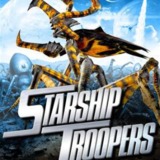