Finally, finally, a hard-headed combat simulator set in the Star Trek universe (from the era of the movies, by the way, and none of this kinder-gentler-Federation Next Generation crap). Constitution-class starships diving down from two o'clock like Stukas out of the sun; Romulan warships fading into rippling, invisible phantoms with the aid of their cloaking devices; and, of course, the dreaded Kobayashi Maru, the "unwinnable" test of character which a certain cadet named Kirk is purported to have beaten. This is Starfleet Academy, Interplay's second "first-ever" Star Trek flight simulator (Interplay reps may disavow knowledge of the earlier SNES release with a slightly embarrassed cough), and this time it looks to be the real thing. I did note with some unease, however, that the state of the game on July 25th seemed not a jot different than what we saw at E3, i.e., just breathing on the keyboard while the demo was running was a good way to get yourself smacked by a maniacally protective producer. Oh well.

Essentially a sexier, greatly expanded version of the ship combat mode found in the Star Trek: Judgment Rites adventure game, Starfleet Academy sends the player on a series of simulated missions with an emphasis on ship-to-ship combat. Ships are highly-detailed, texture-mapped objects ranging in the hundreds of polygons, and the combat is a true 3-D, roll-pitch-yaw, dogfight-style affair. The designers at Interplay clearly know and love their subject matter, as evidenced by the fine graphic detail (shrieking photon torpedoes act as moving light sources) and film-inspired touches (you can effectively emasculate enemy ships by shearing off their engine nacelles with phaser fire). Starfleet Academy promises to be the flagship of Interplay's successful Star Trek line of games - assuming we're ever allowed to play it. 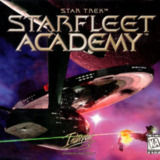