The massive Stardew Valley 1.5 update is coming to consoles soon, so now's a great time to buy it on sale.

Though it's been nearly five years since Stardew Valley first launched on PC, the popular farming sim has only continued to grow over the years, expanding to consoles and mobile platforms as well as adding extensive new features and content. If you're curious to see what Stardew Valley is all about or want to play it on Nintendo Switch or Xbox, now's a great time to pick it up. Its biggest content update yet is coming to consoles soon, and Best Buy has slashed a few bucks off the digital Switch and Xbox versions of the game for today only. You can currently snag Stardew Valley for $12 (down from $15) at Best Buy--these are digital codes you can redeem right away. Both the eShop and Xbox Live currently have the game for full price, though Amazon is price-matching the Switch offer. 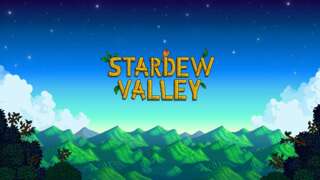 Stardew Valley's expansive 1.5 update released on PC on December 21, making a nice early Christmas surprise for fans of the country-life RPG. If you take advantage of this Stardew Valley deal at Best Buy, you won't have to wait much longer to experience 1.5 on Xbox or Switch, as developer ConcernedApe said on Twitter the new update is coming to consoles early this year--possibly by the end of January.

The free 1.5 update is Stardew Valley's biggest content update yet, according to the developer, so even if you played Stardew Valley in the past, it's worth jumping in just to see all the new additions and improvements. The 1.5 update notably adds split-screen local co-op, a new beach farm layout, bigger quests, remixed Community Center bundles, new character events, and much, much more. The update also adds a significant chunk of late-game content. See the full Stardew Valley 1.5 patch notes for more details--or don't, if you want everything to be a surprise.