LucasArts works the force on the Xbox.

When Star Wars Starfighter hit the PlayStation 2 last December, it provided a much-needed dose of quality gaming to the PS2's "eclectic" lineup at the time. The mission-based game offered an original story that spanned a variety of locales in the Star Wars universe. The successful marriage of next-generation graphics, excellent sound, and solid design produced one of the best Star Wars games in recent memory and a showcase for Sony's new system. Now, almost a year later, Microsoft is hoping that LucasArts will be able to show that the force is with its new console when Star Wars Starfighter: Special Edition hits the Xbox. An enhanced version of the PS2 Starfighter, SE is aiming to offer improved graphics and gameplay on the Xbox, as well as some exclusive extras.

The game's story, set slightly before the events in Episode I, will follow the tale told in the PlayStation 2 version and focus on the three characters created for the game. While these three characters--a rookie Naboo fighter pilot named Rhys Dallows, a female mercenary named Vana Sage, and a pirate called Nym--lead disparate lives, they cross paths and become unlikely allies. The epic tale spans 14 missions spread out through 14 environments. You'll also encounter more than 20 rendered starships in your journey.

Our preview build still had a few rough spots due to lack of optimization, but it gave us a good idea of what to expect when Starfighter SE is released. Graphically, the game offers the expected upgrades to its PS2 incarnation thanks to the Xbox's graphical muscle. The textures have been cleaned up, the lighting has been tweaked, and the frame rate has been increased and stabilized. While the game isn't a tremendous leap over its predecessor, it is a definite improvement. Beyond the obvious graphical face-lift, the game has received some aesthetic tweaks as well, as the game menus have been slightly tweaked for a slicker overall presentation.

While the main missions in the game basically play out the same as they do in the PS2 version, Starfighter SE will feature some extras to make it more than just a straight port with a face-lift. The Xbox Special Edition will offer five new bonus missions, multiplayer games including a new two-player dogfighting mode, and expanded two-player capture-the-flag arenas. You'll be able to take on a friend in dogfight, capture the flag, tag, hunter, and the oddly named but engaging "steal the bacon." The game's frame rate remained high even when playing on a split screen against a friend, which certainly helped the gameplay.

The control is tight and responsive, making good use of the Xbox controller. There's initially a bit of awkwardness when cycling through targets, as the function is mapped to the black and white face buttons. The face buttons that fire your craft's main weapons are also a bit unwieldy at first. However, it's possible to get used to the setup and button placement on the Xbox controller with a bit of practice.

The single- and multiplayer games benefit greatly from the increased frame rate and visual quality. In spite of the lack of optimization that resulted in occasional frame rate hitches, the game already offers a smoother playing experience than its PS2 cousin. So far, Star Wars Starfighter: Special Edition looks to be coming along well. Those eager to check it out can look for it around the Xbox launch this November. 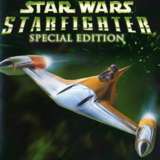