The designers of the follow-up to Jedi Outcast discuss the game's development.

Publisher LucasArts is no stranger to first-person action games--the company's series of Star Wars-themed first-person games has undergone a few name changes (from Dark Forces to Jedi Knight), but the last installment, Jedi Knight II: Jedi Outcast, won critical acclaim for its exciting and enjoyable implementation of Jedi powers and lightsaber battles. LucasArts and developer Raven Software are now putting the finishing touches on their next game, Jedi Academy. Raven's developers have graciously taken a brief break from their busy schedules to give us some insight into the game's development.

Welcome to the Academy!

This section will provide you, the reader, with information and insight on Star Wars Jedi Knight: Jedi Academy directly from the developers. We will pass along tidbits about the development process, features of the game, and more!

To start off, I'll explain how Jedi Academy got started. Just after Jedi Outcast was finished, LucasArts approached Raven about doing another game. We were excited, of course, and jumped right on board!

When we at Raven first sat down to discuss a concept, we talked about our favorite Star Wars moments. We are all big fans of the movies and many of us are also fans of the expanded universe. You may notice that many of our early images and art show a rancor. Could that be one of our favorites? How about a certain Wookiee? Hoth? Tatooine? The possibilities are endless! How could we take all the elements that make Star Wars what it is, the parts that are really memorable, and let people play all those highlight moments?

We were going to have a one-year development cycle, so we wanted something that was fresh, yet reasonable to pull off in that amount of time. One of our initial concepts, and one that has ended up working very well, was to have a tiered level system. Originally, we were thinking of a series of stand-alone missions that the player would undertake in the name of the Jedi Academy. That's when we came up with the idea of letting players select their own missions. With this game mechanic, we could have a lot of stand-alone missions, each with very different locations and gameplay elements, and work them into a larger cohesive plot.

As we fleshed the idea out, we discovered two problems. The first was that Kyle ended Jedi Outcast as a pretty powerful Jedi. If he were to take these missions, wouldn't he just breeze through everything as a Jedi superhero? The second problem was that stand-alone missions felt a little disjointed in terms of any kind of plot progression.

Now that we had a concept we were all excited about, we just had to make the game!

For the issue of the story, Raven sat down with members of the LucasArts team, and we hashed out a basic story arc that starts with the soon-to-be Jedi arriving at the Academy, learning the ways of the Force, and undertaking missions for the Academy. In the weeks that followed, we fleshed out the story to the point where the tiered missions were integral to the game. 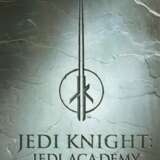