Star Wars: Galaxy of Heroes has received an update that adds new characters, a Raid system, and social elements to the turn-based mobile game.

One of the new characters includes scruffy nerf herder Han Solo, who gets a free attack at the beginning of every battle--yes, he shoots first. A version of Solo wearing Stormtrooper gear was in the game previously. The other two characters include a Gamorrean Guard, who uses Taunts and Counters with Damage Over Time effects, and a Jawa Engineer, who's a healer with a critical chance buff that supports Jawas and Droids.

The game's first raid is called The Pit, which is the first in a growing series of multi-tier raids. The Pit puts guilds up against a rancor, a monstrous creature first seen in Return of the Jedi. It has multiple difficulty levels and rewards for players from level 22 to 80. Additionally, raid leaderboards will show who the best and wealthiest players are.

Speaking of guilds, the new social elements allow players to join them and take part in real-time chat. You can create or join one yourself when you hit level 22. The game introduces guild activities that feature ongoing challenges that could earn you gear and rewards. Guild leaders can customize a logo, promote officers, manage membership, and more.

Star Wars: Galaxy of Heroes is available on iOS and Android devices.

Star Wars: Galaxy of Heroes has added new characters in the past, including Yoda and characters like Rey, Finn, and Kylo Ren from The Force Awakens. 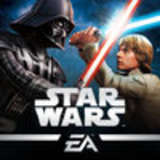