The Entertainment Software Rating Board hasn't been as reliable as it has been in year's past when it comes to inadvertently revealing publishers' upcoming new releases. However, the industry rating board did slip up last week, listing the as-yet-announced Star Wars Battlefront: Elite Squadron for the Nintendo DS and PSP with an E10+ ratings as well as fantasy violence descriptors of the lightsaber and blaster rifle kind.

Thunder thus stolen, LucasArts today officially announced Star Wars Battlefront: Elite Squadron, saying the handheld title would arrive for the DS and PSP this fall. Rebellion Software has been tasked with the PSP edition of Elite Squadron, having crafted the well-regarded Star Wars Battlefront: Renegade Squadron for Sony's handheld in 2007. LucasArts also confirmed for GameSpot that n-Space has been tasked with the DS edition of the game.

One of the primary new additions to the Star Wars Battlefront franchise is the ability to fight in various capacities, according to LucasArts. Players will be able to pound the ground as an infantryman, battle in vehicles close to terra firma, and dogfight in spacecraft. Elite Squadron also offers an all-new storyline, in which players assume the role of X2, an Imperial trooper cloned form a Jedi Master who defects to the Rebellion.

Elite Squadron also supports what LucasArts called "the deepest customization options ever seen in a Star Wars Battlefront title," which extends to players' weapons, armor, species, gender, appearance, and physical attributes. Both editions of the game will also feature multiplayer modes, with the PSP game offering action for up to 16 and the DS version supporting up to four. 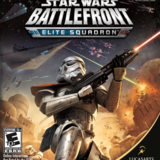