A LucasArts representative confirmed today that the studio is working on a new Star Wars title which it will unveil early next year. Currently called Star Wars: Battlefront, the game will feature online multiplayer war action a la Battlefield 1942 set in the Star Wars universe.

Although some rumors pegged Battlefront as a PlayStation 2-exclusive title, LucasArts told GameSpot the game would be available on PS2, Xbox and PC. The studio declined to reveal any other details on the game, although a Battle of Hoth map is all but guaranteed. 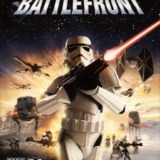